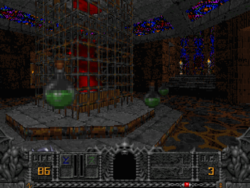 The Fléchette is an artifact from Hexen. It is a small flask of green liquid, and its effects differ between classes:

The fléchette is one of the most common artifacts in the game, and a player may carry 25 at one time.

In the IWADs the fléchette is first encountered on these maps per skill level:

The IWADs contain the following numbers of fléchettes per skill level: