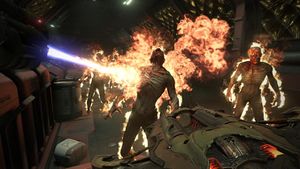 The flame belch being used against a group of zombies.

The flame belch is a side-arm weapon occurring in Doom Eternal, found in the Fortress of Doom after completing the Hell on Earth level. It is mounted on the equipment launcher attached to the Praetor suit's left shoulder along with the frag grenade and ice bomb, though it is always available as a separate attack in addition to the currently selected grenade type.

The flame belch fires a short burst of fire (according to the Codex, at over 1,000 degrees Celcius) that sets enemies ablaze - turning left and right while firing allows the belch to hit groups of opponents. Enemies on fire will take additional damage and drop armor shards; killing an enemy while it is on fire will produce a larger shard drop. The flame belch is the primary source of armor during battle, making it a vital part of Doom Eternal's "combat loop" along with glory kills and the chainsaw. After each use, the flame belch must recharge before it can be fired again.

The combat shotgun and super shotgun will produce more armor when killing a burning enemy.

The flame belch has a cooldown of 25 seconds, or 12.5 seconds with the Quickdraw Belch Praetor Suit upgrade.

By using Sentinel crystals, the player can unlock three upgrades for the flame belch that boost its capabilities:

When using the Equipment Fiend rune, killing enemies that are on fire will reduce the flame belch's cooldown time by half a second up to seven times per cooldown.