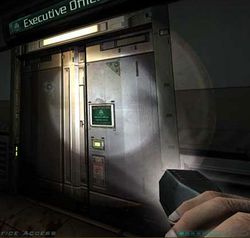 The flashlight is a weapon in Doom 3. Its main purpose is to light up dark corridors in the original game, although it can be used as a club at close range.

The flashlight in starter levels can be used to attack zombies to conserve ammo. It has slightly shorter range than the fists when used in this way, but is about twice as powerful. Attacking an enemy stronger than an Imp is not recommended. In later levels, the flashlight should be used to light up dark corridors only. Upon sight of an enemy, a more powerful weapon should be swapped out. The flashlight could also be used to attack corpses on the ground to check that it is dead so that it does not rise again as a zombie. Additionally, if a zombie is dormant in this way, it can be alerted to your presence by shining your flashlight at it from a distance, allowing you to deal with it safely from a distance. In deathmatch, using the flashlight alerts other people to your whereabouts. The weapon is not included in the Xbox version's deathmatches.