Foreverhood is a game made by Brian Goodsell (Skadoomer) that used the source port ZDoom as its game engine, but switched to GZDoom with version 1.1. Demo 1.0 was released on September 10th 2006, with demo 1.1 being released soon after. It was later cancelled.

The initial release of Foreverhood, version 1.0, relied on a custom batch file, called FOREVERHOOD.BAT, to start the supplied ZDoom executable, an unofficial release of ZDoom more commonly known as the ZDoom Community Build. Starting ZDoom directly results into an error asking for the Doom II WAD file. Foreverhood, however, can run standalone. The executable carries version number 2.0.96x and is dated August 7, 2005. For the 1.1 GZDoom version, the executable used is version 1.0.21, corresponding with ZDoom version 2.1.6 (r340) dated October 5, 2006.

The Foreverhood demo received one of the 13th Annual Cacowards.

The premise of Foreverhood is abstract. You are one of the Nuu, a childhood race of creatures that spend their time daydreaming on a small planet of woods and mountains. The player awakes one day to find themselves under an overcast sky with everyone distraught over the change that is in the air. You navigate the space under the watch of the Sequas or parents of the world to uncover what is beyond the clouds and what lies in store for the world of your kind. 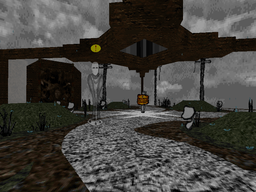 Gameplay screenshot of MAP01, showcasing one of the Sequa NPC and the gateways