Forsaken Overlook is a single-level PWAD for Doom II using a Boom-compatible port. It was designed by Matt Tropiano (MTrop) and uses the music track "Fallen Sun" by James Paddock (Jimmy). The par time defined in MAPINFO is 30:00.

Forsaken Overlook was released in 2013 and received one of the 20th Annual Cacowards that year. 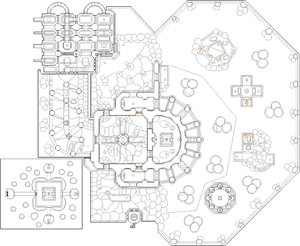 Map of Forsaken Overlook
Letters in italics refer to marked spots on the map. Sector, thing, and linedef numbers in boldface are secrets which count toward the end-of-level tally.

* The vertex count without the effect of node building is 8461.

The level was originally designed for the Secret Santa Imitation project led by Brian Knox (Snakes), in which mappers would be assigned to another mapper, and have to make a level in the style of the mapper they were assigned to. Tropiano decided to emulate the style of Chris Kassap (lupinx-Kassman).