The player can obtain several weapons in the Fortress of Doom over the course of the game's story after specific missions; the flame belch is introduced after Hell on Earth, the ice bomb is introduced after Exultia, the ballista is obtained after Doom Hunter Base and the Unmaykr is unlocked after obtaining six Empyrean Keys as early as after Taras Nabad. All of these weapons (barring the Unmaykr) are required for the story to progress. 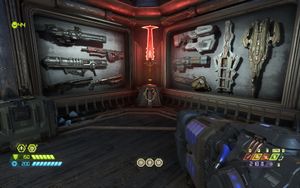 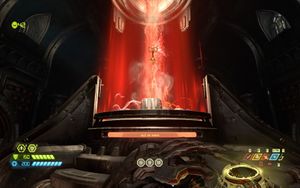 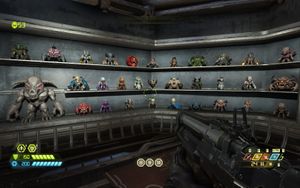 31 demon toys can be collected throughout the levels. Activating one of the demon toys allows to open the model viewer for the character in question.

The Fortress of Doom contains several collectible items, as well as the Unmaykr and three Slayer skins.

The Unmaykr is sealed inside a containment device at the back of the fortress, on the middle floor. It can be obtained after completing Taras Nabad, provided that all six Empyrean Keys have been obtained by completing the Slayer Gate encounters. 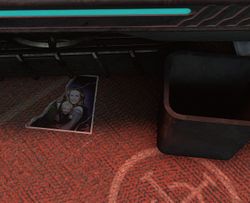 A photo of the Slayer's family.