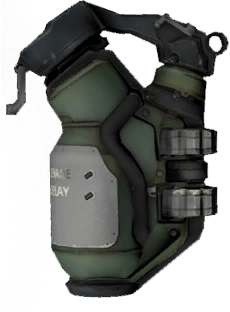 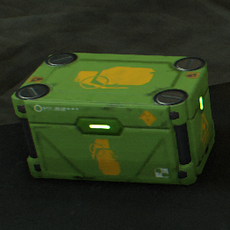 A recharge for the frag grenade.
For other versions of this weapon, see:

The frag grenade is a weapon and item in the 2016 Doom which is available in single player, multiplayer, and SnapMap games. While a conventional grenade based on the M67 at the core, it has been enhanced by the UAC in several ways: a "Comp-D" explosive pack with steel alloy shell provides a five meter radius of lethal damage free of drop spots, a chemical fuse mechanism provides better reliability, a machined interior case yields higher projectile output, and a safety clip is provided for the trigger switch to prevent unintentional "pin pulling."

The frag grenade is available in both modes as a secondary form of attack in addition to the player's current weapon. In single-player mode, grenades are found as ammunition in the environment. In multiplayer, the frag grenade is one of the items which can be selected as part of the player's loadout during spawning. It can be thrown at virtually any time for instant blast damage over a small area. It is naturally best used in open areas or from a good vantage point on a restricted target, since bounce-back is always a possibility.

The frag grenade, along with the personal teleporter, is one of two side-arm equipment items that are already unlocked for immediate use in multiplayer and do not require further progression.

In SnapMap, it is possible to either specify the frag grenade as equipment in a player loadout object and apply it to the player at map start or via an event, or to place a frag grenade pick-up item in the level for the player to find.