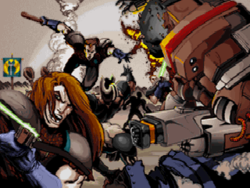 The Front engages the Order in a pitched battle.

The Front is an organized military resistance movement in Strife: Quest for the Sigil. It was formed to fight against the Order. The leader of the Front is Macil.

Other members and partners of the Front include: