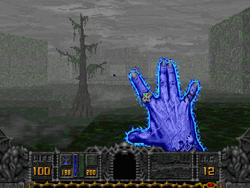 The Frost Shards being used in a pre-release screenshot. 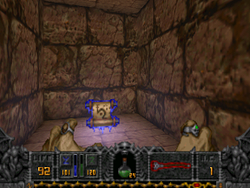 Frost Shards at the ready and on the map.

Frost Shards is the second weapon of the Hexen Mage, and is something of the game's equivalent to the shotgun. It is a spell which uses 3 blue mana to launch a wide, cross-shaped spread of 17 magical ice darts which can freeze enemies. If used at very close range, the Mage can touch the enemy with his hand inflicting significantly more damage. If used at close range, not all of the darts will spawn before hitting the enemy. Thus, it is ideal to hit enemies either at melee range or medium range. The frost shards also have a very long delay between attacks, although this is shortened slightly if the fire button is held down. All these reasons make the weapon somewhat difficult to use effectively.

Frozen monsters and players will shatter if left alone for a few seconds or attacked; a creative player will use them as cover until then. The frozen bodies can also be pushed around, potentially allowing the Mage to temporarily blockade passages against encroaching monsters so that he can focus on defending a single entrance to a room at a time.

Curiously, if the Mage is moving fast enough (i.e. using the Boots of Speed), the ice projectiles may damage the Mage instead of firing outward; essentially he runs into his own projectiles.

This weapon has a very complex mechanic of firing projectiles. If a shootable object presents in front of the Mage within the melee range (64), the spell does not spawn any projectiles, instead dealing 90-105 ice damage to the target. Otherwise, the Mage fires a single shard that, after two ticks, spawns 4 more shards: one to the left side, one to the right side, one above and one below. After another two tics, this "second generation" of shards spawn four more, and this "third generation" spawns another eight shards after two more tics, to the maximum amount of 17 shards. Every shard created by another shard has the same horizontal coordinates as the spawning one, while those spawned above have a Z offset of 8 map units and those below have a Z offset of -4 map units, these shards fly in the same direction as the spawner. Those spawned to the left and right side have the same Z offset as the spawner but their horizontal flying angle is shifted by 5° in the respective direction. The "first generation" shard has a speed of 25 map units per tic. The "second generation" ones have horizontal speed of 24 units per tic, the third one has 22 and the fourth and the last one has only 20. They all preserve the same Z momentum as the first one, though, making the cross-shaped spread distort over time if fired in a non-horizontal direction. The shards from various "generations" also have damage multipliers applied to them. The "first generation" has a x8 multiplier, the second one has x4 and the third one has x2, which are applied to the shards' base damage of 1-8. All these multipliers are set to x1 when the shard spawns its offsprings. Therefore, if all shards spawned hit the target during the same "generation", the total damage will be 8-64 for the first one, 17-136 for the second one, 13-104 for the third one, and 17-136 again for the fourth and the last one.

In the IWADs the Frost shards are first encountered on these maps per skill level:

The IWADs contain the following numbers of Frost shards per skill level: