Fuel Devourer is a single-level PWAD of Doom II with a Boom-compatible port. It was designed by C4tnt and Arthur O. (Archi) while Jay Reichard (silentzorah) created remixed music tracks for the map and the title and intermission music.

The map includes one new enemy: a white-coated zombie, possibly a former scientist, wielding an axe. It replaces the Wolfenstein SS.

Fuel Devourer was the winner of one of the Cacowards in 2013. 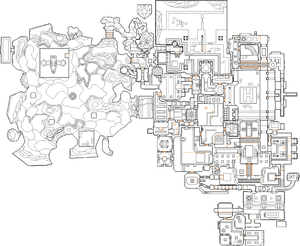 Map of Fuel Devourer
Letters in italics refer to marked spots on the map. Sector numbers in boldface are secrets which count toward the end-of-level tally.

* The vertex count without the effect of node building is 13222.