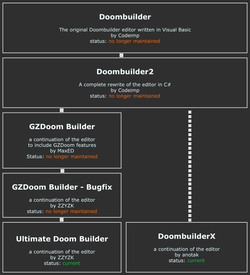 A timeline of Doom Builder versions and forks.

Doom Builder 2 is a Doom level editor with full support for Doom, Doom II, Heretic, Hexen, Strife and all the popular source ports. Popular features include lots of customizability, prefabs, advanced drawing code, and a 3D mode which lets you browse and edit your textures, and align them, in real-time. A script editor is also included for engines that support scripting. This product is developed by Pascal "CodeImp" vd Heiden and is free software, licensed under the terms of the GNU General Public License. The project was first released in May 2009, as the latest update was released on June 1, 2012. It has been confirmed by CodeImp on Doomworld Forums that Doom Builder 2 is no longer in development, as stated in a post made on January 17, 2019[1].

Doom Builder 2 is a complete rewrite of Doom Builder, with no code in common.