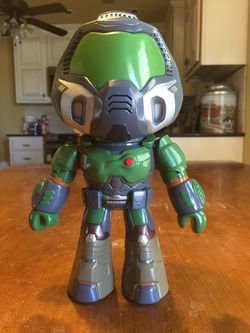 The Doomguy collectible figure series from Gaming Heads was first released on April 11, 2018,[1] after an initial announcement in January 11 of the same year.[2] Officially licensed by Bethesda, the figures are scale, detail-complete recreations of three of the Doomguy collectible figures that appear in Doom (2016). As of May 17, 2018, the Doomguy in the green Praetor suit and the Patriotguy figure, in an American-flag-inspired color scheme, are available for purchase; the Pinkguy figure is available for pre-order. The figures initially retailed for US $39.99.

The Doomguy figure stands approximately nine inches tall, and can be stood upright without external support. The figure is composed almost entirely of durable PVC. Articulation is provided in the form of ratcheted joints in the waist, neck, shoulders, and forearms, and freely rotating joints in the wrists, allowing the figure to be posed and manipulated as it could be in-game by the Doom Slayer.

The figure also includes a sound feature. A red button on the figure's chest in the location of the Doom Slayer's Argent energy absorption device can be pressed to play the same chip-tune-styled excerpt of "At Doom's Gate," the theme from E1M1: Hangar, which occurs in the game when finding the collectibles. The speaker is located near the mouth area of the marine's helmet. The top of the marine's helmet is magnetically attached and can be removed in order to install the two AAA batteries required for operation of the sound feature.

The figure comes in a blue and black window box with form-molded plastic casing inside which can hold the figure for display. The opening on the front of the box is styled like the visor of the Praetor suit. Notably, the box is not sealed or shrink wrapped, minimizing any loss of value that could occur from opening the product.

Promotional images of the Doomguy figure used on the Gaming Heads website display use of a lustrous chrome toy paint on metallic areas of the figure, but it appears that it was either subject to being easily damaged or poorly distributed, as evident from scratches or streaks that appear on the helmet. The figures as shipped use a more durable, uniform light gray metallic paint on these areas instead.