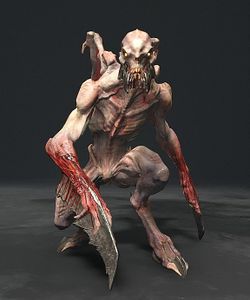 The gargoyle is a new monster introduced in Doom Eternal. It appears as a small, frail humanoid with bat-like wings, falx-shaped arms, and faun-like legs.

Shooting a gargoyle while it is in the air instantly stuns it. It can spit acid as a ranged attack. It typically avoids melee combat head on and prefers to flank from behind; it can attack at high speed with its blades.

While they are not very dangerous individually, gargoyles tend to appear in large numbers, which can be dangerous if they are allowed to overwhelm the player or if they are supporting stronger monsters.

Gargoyles have a bit more health than imps and zombies, with 300 HP (120 staggered).

Unlike most demons, the gargoyle is said to be native to the world of Sentinel Prime, where they have plagued the Night Sentinels for centuries. They were well known for their ability to fly over the city's walls, taking any available opportunity to massacre a great number of people before returning to their native wastelands. It required vigilant and skillful marksmen to intercept them.

The gargoyle was first featured in the QuakeCon 2018 game play reveal. Several instances of the monster are encountered in the city in particular, but they are all eliminated at a distance without being able to effectively attack. As the monster was unnamed in this reveal, temporary fan-given names were assigned, including "harpy demon" and "flying demon".

In the Google Stadia game play footage, it can be seen shooting yellow fireballs at the player, and, after it is killed, a codex entry message appears with the confirmed name "Gargoyle".[1]