Several interesting pieces of Order technology occur in Strife: Quest for the Sigil and are usually the object of raids that the Strifeguy is sent on in order to shut down or destroy and thereby cripple the Order's defenses, troop manufacturing, and materiel supply chains.

The computer can be found in Central Administration in the Bishop's fortress. Among other processes, it is responsible for keeping the force fields in the Bailey active, a fact first mentioned by Quincy, the Front's underground operative in the fortress. While implied to occupy a large part of the facility, the core of the computer is an actor which appears as a levitating, rotating green orb with an electrified circuitry pattern suspended in the midst of several columns from which currents run to the core. Upon sighting it, BlackBird exclaims, "Let's blow it up!" Almost any weapon is capable of destroying the computer in a small number of shots. Note that although it will appear to explode violently, no damage is actually emitted. The message "You blew up the computer!" will appear and quest flag 27 is awarded.

While destroying the computer itself does not actually clear the force fields in the Bailey, the quest flag set by its destruction allows triggering a "clear force fields" linedef in that level. A logic error wherein the game assumes that this line must be passed over only after the computer has been destroyed allows a potentially game-killing dead end to form if the player should leave Central Administration early. This was corrected in Strife: Veteran Edition.

Oddly, the quest flag set by destroying the computer is also one of two flags checked for when determining what ending the player should receive upon beating the game. This may indicate that the computer was repurposed or relocated late into the development of the game, and that it was originally part of the final hub; or alternately, that its destruction was somehow optional and another way to reach the Bishop existed.

The converter is a system which is composed of the bulk of the Conversion Chapel. It consists of a system of conveyor belts feeding sedated peasants into a central machine inside which they are rapidly converted into inert acolytes ready to receive programming. It is seemingly implied that the converter is a recent innovation, since manual assembly of acolytes is both shown during cutscenes and is implied to still be ongoing in the Loremaster's lab. Macil sends the player on a mission to destroy this machine after ostensibly learning about it sometime after the player kills the Bishop, provided the player does not choose to trust the Oracle instead.

Unlike the computer, the converter only consists of linedefs and has no actors. The switch which shuts it down is specially programmed to award quest flag 25 as well as a stamina implant upgrade and accuracy stat increase. An error in this programming can potentially crash the game if it is run under a DPMI provider other than DOS/4GW.

The converter exists inside the Order factory, which is implied to be the location where a cure for the virus infecting the population is found. The converter's destruction itself is one of the two quest flags checked for in order to determine the ending the player receives when beating the game. Because it is possible to skip destroying the converter, it is still possible to receive the game's mediocre ending when choosing to trust Macil.

A bug in the original design of the Conversion Chapel level causes the converter to be sealed off if the Loremaster has already been defeated. This is apparently intended only to hide the converter during deathmatch game play, but can be triggered during single player as well because of the aforementioned sequence break. While not game breaking, this was also repaired in Veteran Edition.

The manual gate control for the castle in Tarnhill is accessible from the sewers in an area below the castle itself. While the Front has been searching for its location for a long time, it is finally discovered after the Strifeguy is sent on a mission to deal with Weran, the leader of the sewer mutants, in exchange for information on its whereabouts. The destruction of the gate controls opens the gates, allowing the Front to attack through them en masse.

While the actor which makes up the gate control appears to explode when destroyed, like the computer, this does not damage the player. It awards quest flag 16, which triggers a linedef in Tarnhill which does the actual opening of the gate door, and gives the message, "You destroyed the gates!" A separate line trigger immediately after it will respond to this quest flag and cause BlackBird to announce, "You've done it! Send in the shock troops and tell Macil we're coming in!" 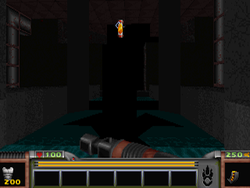 The power crystal in the reactor core.

The power crystal is an alien device located in the core of the Tarnhill power station and is used to generate power for the Order's operations in and around the castle. Similar but non-functional cores can be found in the alien ship, proving that it is of a design either taught to the Order's adherents through the voice of the One God or derived directly from the wreckage. After Macil's test mission to free the prisoners, he states that his higher goal for the player is this device's destuction, since it is the first step necessary to enable direct access to the Order's castle for the Front troops.

Destroying the power crystal causes massive repeated explosions which set the player's view temporarily to full brightness, and lowers the sector in which the crystal existed to the lowest surrounding floor height. The message "You blew up the crystal!" will appear, and quest flag 14 is awarded. This quest flag triggers several linedefs in the town which will clear all force fields on that map.

While it is technically possible to skip destroying the power crystal and complete the sewer mission first, one would find in this case that the gates have opened but the force fields remain in place, leaving the castle still inaccessible. Thus it is not possible to fully skip destroying the power crystal; this is not game breaking however, as the crystal remains accessible even after the sewer mission has been completed.

A transmitter in the mines wirelessly controls the neural implants of the drones who work there, forcing them to mindlessly slave in the acquisition of degnin ore for the Order. Destroying the transmitter will free these drones, shutting down the Order's supply of the ore. While seemingly required due to a door that shuts in the mines and will not open until the transmitter is destroyed, it is possible for drones to open this door from the outside, making the side quest technically optional, and the ore only required for access to the factory.

The transmitter consists of a single switch which, when shot, changes to a destroyed texture, awards stamina implant and accuracy stat upgrades, and awards quest flag 29. This behavior is actually hard coded to the particular texture used on this linedef, and will occur with any switch-activation linedef which uses that texture in a custom map.