Gauntlets of the Necromancer 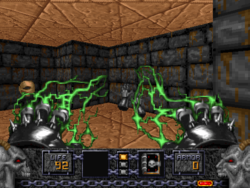 Gauntlets of the Necromancer in a secret area in E1M2: The Dungeons.

The Gauntlets of the Necromancer are a weapon from Heretic. They are a pair of spiked gauntlets with a green aura. When active, they emit short-range magical energy that damages enemies for 2-16 damage every four tics and drags the player toward them. They neither use nor require any form of ammunition, so they are always usable if they are in the player's possession. The Gauntlets are essentially Heretic's version of Doom's chainsaw. When a Tome of Power is active, the Gauntlets have a red aura, increased attack range, and the ability to drain health from enemies (equal to half damage dealt, rounded down) and transfer it to the player. This weapon is always effective on ghosts.

The weapon can already be picked up in the first level of the game, E1M1: The Docks, if the secret cache is uncovered. The Gauntlets finally appear in a non-secret area in E1M3: The Gatehouse.

The Gauntlets are not a good weapon to use against sabreclaws, because the sabreclaw is still able to slice up the player even while it is being Gauntleted. Using them on golems is safer and more effective, albeit the player needs to aim directly at the golem otherwise he will get punched. The Gauntlets work well on enemies that move and attack more slowly, such as the undead Warrior, disciple of D'Sparil and the ophidian. The Gauntlets are most effective against monsters if the player keeps walking slowly back while attacking the target monster. This way the monster needs to chase the player instead of the player having to face the monster up close, giving the player a bit of range.

Using the Gauntlets in tandem with a Tome of Power can be surprisingly effective against maulotaurs. Provided that there are no other powerful monsters in the area, the player can latch on and drain health from the maulotaur faster than it can deal out damage in return and the player is unlikely to die, although any armor he is equipped with will be damaged if not destroyed. The duration of the Tome of Power is long enough for a maulotaur to be slain using only this method, but the time limit is tight. The risk of the player dying during the performance is considerable only if the player has a lot less than 50 hit points when starting, given that there is no armor. It is because the first hits by the maulotaur can kill the player near the beginning. This applies especially to the higher skill levels. Once the health has risen to the safer side of 50 hit points, however, working is safe if the player only is able to cause constant damage to the maulotaur and has not wasted any seconds when the Tome of Power has been in use.

The idle frame without the Tome of Power is very similar to the idle frame for the gauntlets of Baratus, the fighter in Hexen.

In the IWADs the Gauntlets are first encountered on these maps per skill level:

The IWADs contain the following numbers of Gauntlets per skill level: