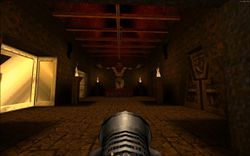 The main portal area of the startmap, where the campaign could be selected. 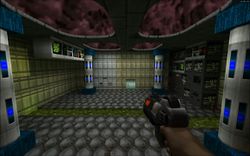 The entrance to what was meant to become the Doom campaign.

Generations was a modification for Quake II which integrated characters, levels, and enemies from Wolfenstein 3D, Doom, and Quake into the Quake II engine. As of its final release, it had implemented all of the player classes from each game, and contained the complete shareware first episode of Quake with all of its maps, enemies, and weapons translated into the newer game. The eventual goal was to provide the shareware episodes of Wolfenstein and Doom as well, with an apparent understanding between the mod team and id Software that restraining the modification to shareware content from the previous games would be acceptable.

On June 13, 1999, it was announced by the mod team leaders that this understanding was incomplete, and that id Software had expressed concerns about copyright and trademark issues created by combining content from their various games.[1] The next day, the decision to voluntarily terminate the project was made, with the following statement issued via the Generations main news page:

"id Software has specifically stated that they are NOT asking us to shut down Generations. Therefore, we are not technically 'foxed,' as the term goes. But id has set guidelines as to what restrictions we are expected to place on ourselves. Generations, as far as v.98 goes, is in broad, direct, and clear violation of nearly all of these guidelines, in virtually every aspect. In fact, so is every version of Generations that has ever been publicly released. In case you haven't guessed, the Files page is down, and the mirrored downloads will soon be unavailable. In volunteering to remove the files, we hope to avoid any further legal complications with id Software."
―Generations Team [2]

Because the project was shut down, copies of the incomplete modification are difficult to obtain.

The concept of the Generations mod was eventually reborn as Generations Arena, a modification for Quake III Arena which reuses assets that already exist in the game, avoiding similar legal issues.