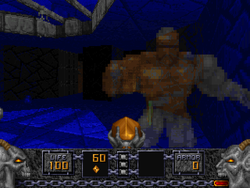 Some monsters in Heretic (golems and undead warriors) can appear in a form of a ghost. They are translucent and unable to be hit by certain attacks which are defined as non-magical. Projectiles that cannot hit ghosts will simply travel through them as if nothing was there.

The Shadowsphere temporarily confers all the properties of being a ghost to the player when used. Monsters' aim becomes erratic when attacking ghosts, whether the targets were players with the Shadowsphere or ghost enemies engaged in infighting.

Additionally, the disciple of D'Sparil possesses the ability to flicker in and out of tangibility when preparing its attack, so a player might find a couple of their crossbow bolts going right through them.

Ghosts cannot be hit by attacks which have the THRUGHOST flag, including:

They can be harmed by other attacks, such as:

Iron lich tornadoes do not home in on ghosts.

Originally, Heretic used the SHADOW thing flag, recycled from Doom's spectre and blur artifact effect, to confer both translucency and weapon immunity to an entity. However, some modding-oriented ports such as the ZDoom family have decoupled translucency from the ghost immunities, and use a GHOST flag to signify that the latter effects should be applied.