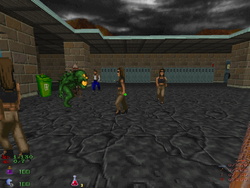 The school courtyard overrun with ghoulies.

Ghoul School, or Ghoul School 3D, is a total conversion for GZDoom/Heretic developed and released by Mike MacDee (Impie) in 2017. It is a 3D remake of Scott Marshall's NES game of the same name, about a high school campus that becomes overrun with a variety of colorful undead monsters. The overall tone of the mod is humorously spooky, and it doesn't take itself too seriously.

Though it is an action game in the tradition of Doom, conversing with NPCs and solving puzzles are both major aspects of the gameplay as well. Often Spike will miss a vital clue or important item if he angers or kills an NPC.

Spike O'Hara just got his dream girl Samantha to agree to go to prom with him, even though it seems she only agreed in order to get back at her ex-boyfriend Frank. With only a week to go before the dance, the school becomes overrun with undead monsters, forcing Spike to venture into the catacombs beneath the school, find whatever is causing the ghoul uprising, and set things right before the whole town is zombified. The invasion seems to center around the cantankerous vampire Barlow and a weird skull artifact removed from the catacombs by Dr. Femur, the eccentric history teacher.

In Episode 2, the city is overrun with walking eyeballs that have been growing off of Dr. Femur's copy of the Necronomicon. Spike must explore the secret lab beneath the school AND the land of the dead in order to put a stop to it.

Due to the school campus setting, Spike's arsenal lacks conventional weapons: he is forced to be creative and use whatever tools are handy. Some monsters are more vulnerable to one weapon than another: Fire Guys, for example, are easily dispatched with the Water Gun, and immune to the Hairspray Flamethrower.

Water Gun. A Super Soaker loaded with holy water. Spike's go-to weapon on the campus level, since holy water is harmless to humans but fatal to undead monsters.

Hairspray Flamethrower. If Spike finds a lighter he can use hairspray cans as portable flamethrowers which dispense a deadly splash attack.

Mana Zoop. A strange magic spell that allows Spike to shoot monster-piercing ectoplasm from his fingertips.

Gamma Ray. A ray gun used by Professor Mengeler when he was a member of the Spirit Ridders. Fires deadly beams that split and scatter on impact.

Spike has access to several stock Heretic powerups, in addition to several new ones, such as the Football Helmet which replaces the Silver Shield.

Ammonia/Bleach Bombs replace the Timebomb of the Ancients as the drop-and-run explosive weapon.

Police Beacon summons up to three policemen which proceed to pummel the nearest monsters with their fists. Like all human NPCs, they become zombies when they are killed, or Fire Guys if killed with fire attacks.

Summon Familiar Scroll summons a small demon that blasts monsters with fireballs. It is a rare and dangerous item: when there are no monsters left to slay, the familiar often gets bored and proceeds to attack human targets.

Portable Rejuvinator Unit and its respective refill units can gradually restore Spike's health when activated. If it runs out of juice before a refill is used, the PRU is expended. It can only be acquired from Nurse Ratchet or by cheating.

Crucifix Rosary forces monsters to flee from Spike in fear when it is activated.

Each monster is more vulnerable to certain weapons than others.

Zombie - Humans which have been turned into mindless undead monsters. They only have a claw attack, but roam most maps in large numbers. When a human NPC is killed, it usually turns into a Zombie and turns on Spike. They are fairly easily killed, but just as easily revived by G-G-Ghosts. Weakest to the Water Gun.

Ghoulie - A green skull-faced undead creature that spits yellow goo at its victims and bites rapidly up close. It is slightly tougher than the Zombie and inhabits the Underworld in droves. Weakest to the Water Gun.

Dark Ghoulie - A black Ghoulie whose red projectiles pursue Spike relentlessly. They are tougher than regular Ghoulies and have deeper, more menacing voices, but are otherwise identical. Weakest to the Water Gun.

G-G-Ghost - A wandering specter which can possess dead monsters and bring them back to life. Each G-G-Ghost can only possess one corpse, but they spawn on every map in large numbers, allowing them to re-populate the map while Spike is trying to accomplish his objectives. Cannot be killed, only avoided.

Spook - An extremely aggressive ghost-head that viciously charges and bites. They are tough to hit due to their small size and mosquito-like movements, but cannot be revived once killed. Weakest to the Water Gun; invulnerable to the Baseball Bat and Rivet Gun.

Fire Guy - A walking skeleton wreathed in flames. It is a very tough customer and spits a salvo of deadly fireballs. Both Fire Guy and its projectiles leave painful trails of fire wherever they go. Extremely dangerous due to the fact that fire turns human NPCs into additional Fire Guys. Weakest to the Water Gun; immune to Hairspray Flamethrower.

Eye Guy - Anthropomorphic eyeballs that shoot eye projectiles and make shrill, annoying noises. When they kill human NPCs, they turn them into additional Eye Guys. Weakest to the Rivet Gun and Baseball Bat; Resistant to the Water Gun.

Zombie Soldier - Only found in Episode 1, almost exclusively on the Totenhaus map as manor guards. The Zombie Soldier is a chuckling undead army grunt who fires highly damaging bullets in quick succession. Weakest to Rivet Gun and Hairspray Flamethrower, though the latter sometimes turns him into a Fire Guy; resistant to the Water Gun.

Fallen - A flying, fiery Ghoulie with a number of lethal flame attacks. It serves as a mini-boss in several areas of Episode 2. Weakest to Water Gun.

Nereid - A giggling water elemental found in small numbers on the Weird Science and Underworld maps of Episode 2. It can only be damaged when it takes humanoid form to attack. Weakest to Gamma Ray.

Rat - Occasionally found wandering the Underworld and Totenhaus maps. It's so tiny it's difficult to hit with any weapon, but does little damage with its bite. Immune to Water Gun.

Bonehead - Giant flying skull that spits and bleeds fire. It serves as a boss in Episode 1 and a common enemy in the Deadlands map of Episode 2. Weakest to Gamma Ray; immune to Hairspray Flamethrower.

Honeycutt - The undead captain of Barlow's manor guard, a sassy zombie with an itchy trigger finger. Fought in the library of Totenhaus in Episode 1.

Vampire - A giant, flying, skull-faced fiend that can summon swarms of bats and fires deadly blood projectiles en-masse. A Vampire called Barlow serves as the final boss of Episode 1; a group of weaker Vampires serve as the bosses of the Deadlands in Episode 2. Weakest to Water Gun and Hairspray Flamethrower.

Ghoulmeister - A giant eyeball monster made from the Necronomicon and its author, Abdul Alhazred. It serves as the final boss of Episode 2, unloading waves of eye missiles at Spike while reviving whatever Eye Guy corpses it comes in contact with. The more damage it takes, the faster and more aggressive it becomes.