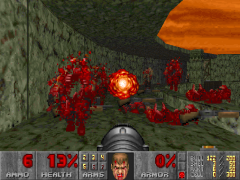 Three enemies being gibbed, plus two gib corpses on the ground, in E4M8: Unto the Cruel

Gibs are the little bits of internal organs, flesh and bone that are left when a player or monster has not only died, but exploded into body parts.

Gib death occurs when, after a character has been damaged, its health is less than the negative of its spawn health (or original hit points). In other words, the character has suffered, in total, more than twice the damage needed to kill it in the normal fashion. For example, a zombieman having 1 hit point left (and which had an initial health of 20 hit points), would require an attack dealing 22 points or more of damage to be gibbed. An attack causing gibbing may also cause the monster's body to be thrown very far from its actual location of death.

The rocket launcher and the BFG9000 cause gibbing deaths very easily, although a second shot from the plasma gun can sometimes gib a zombieman or shotgun guy who has survived the first shot. Getting telefragged also results in gib death, as it deals 10,000 damage.

Only certain characters have a distinct animation sequence to denote a gib death. In Doom, a special death sound, DSSLOP (a squishing sound), is also played. While the BFG and telefragging can be used on most monsters to meet the above damage threshold, the normal death animation will still be used for any monster that does not have a gibbing animation.

A different form of gibbing occurs when corpses are crushed either by a crusher or a closing door, resulting in a pool of blood.

An arch-vile can resurrect a gibbed corpse as though it were not gibbed, although the animation is again different. 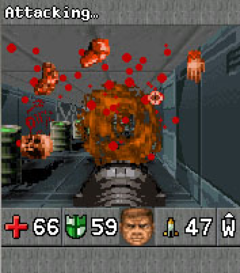 In the PlayStation port, the status bar face explodes when the player experiences a gibbing death and the DSSLOP sound is also played when a door or a crusher create a pool of blood. In the 3DO port, the player's face always explodes whether or not he actually gibs.

In the Game Boy Advance ports, gibs are notably missing and only the normal death animations are featured.

Gibbing in Doom 3 is readily seen by attacking zombies with the shotgun at close range, or hitting corpses with the flashlight. In the 2016 Doom, any normal non-boss enemy can be gibbed by weapons that are powerful enough, including (amongst others) the rocket launcher, Gauss cannon, BFG-9000, and attacks from the player's berserk-powered fists.

In Heretic and Hexen, the threshold to suffer a gib death is lower, set at half the health rather than full health. For example a player is gibbed at -51 health and lower, instead of -101 health. If Corvus or Baratus is gibbed, his skull will fly into the air, and the camera detaches from the player's body to follow the skull, allowing him to see his own remains.