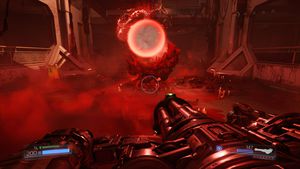 A gore nest infests an area of the UAC Mars Base, a view into Hell visible in the portal above it. 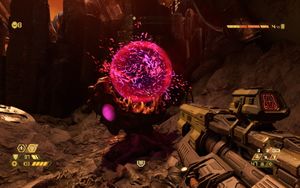 The gore nest is an animate object occurring in both Doom (2016) and in Doom Eternal, a living mass of blood and tissue derived from the victims of the demons, which is created through dark rituals and ceremonies they perform upon the remains after bringing them to the site of the nest. Hell energy from these rituals eventually connects the gore nest to Hell, acting as an "umbilical cord" of sorts, and an interdimensional rift begins to form atop the fleshy creature through which can be seen an area on the other side. The demons are fiercely protective of the gore nests. If one is attacked or nearby demons are angered, more demons may arrive through the rift to defend or avenge the nest. It is likely that the gore nest plays a critical role in the process through which Hell subsumes and conquers other worlds.

The Doom Slayer destroys gore nests by grasping what appears to be a rudimentary ocular organ on one side of the abomination, and twisting and ripping it from its place. This results in a dramatic spray of blood and a chilling otherworldly scream from the nest itself which results in an immediate wave of demons who will attack relentlessly. The nest itself will then explode in a shower of blood and gibs, as this organ seems to be critical to its survival. In terms of game play, the gore nests serve as the centerpiece of the arena-based combat mechanic. Areas with gore nests will generally be declared as having demonic presence at an unsafe level, and the UAC's automated security systems will lock down the area until the nests have been destroyed. Dr. Samuel Hayden states near the onset of the game that this system cannot be bypassed through any protocol.

Some gore nests are optional and, if ignored, will result in the encounter of fewer enemies. However, it is usually in the player's interest to destroy all of the nests in order to earn weapon upgrade points.

While the ordinary gore nest from the game's predecessor is not found in Doom Eternal, two special forms of gore nest occur regularly. In most levels of the game, up to two secret encounters can be found. These are triggered by activating their corresponding red-colored gore nest. Until the secret encounter has been defeated, the gore nest will not explode, and will regenerate its torn-off organ.

In addition, six of the levels contain Slayer Gates. These intense optional encounters are again triggered by a special form of gore nest which is purple in color and has various bony and more angular parts integrated into it. While the gore nest will scream upon removal of its organ and the portal on top will dissipate, the gore nest itself will only explode after a Slayer Gate is successfully completed. At that point, an Empyrean Key will be left behind by the nest.

Doom Eternal further explains that gore nests are a more specific form of Hellgrowth, a cancerous, rapidly growing organic biomass that is associated with demonic activity and invasions. Gore nests are explained to emit powerful electromagnetic fields which induce an inverse quantum field. This results in tears in space-time which open up portals—also called continuum gates by the ARC—to Hell. Furthermore, it is mentioned that Hellgrowth in general emits toxins hostile to native life, effectively terraforming the environment around it into something suitable only for habitation by demons.

A special level-sized gore nest makes up a significant portion of the eponymous Super Gore Nest. Rooted in the heart of a UAC reactor facility, its growth into a super gore nest was accelerated through some type of dark ritual carried out by the UAC cultists. The resulting portal is capable of transporting demons numbering in the millions to Earth, making it a central focus, and in fact, the original starting point of the invasion.

Each level in Part One contains two gore nests that trigger secret encounters; completing both encounters in a level will unlock a new Slayer skin. Additionally, the UAC Atlantica Facility and The Holt include nests hidden behind Slayer Gates; destroying these nests and completing their combat encounters will unlock support runes.

Part Two also includes three gore nests, one in each level. Interacting with a gore nest will trigger an "Escalation Encounter", consisting of two waves of combat with increasing difficulty. The first wave is mandatory and awards an upgrade for the Sentinel Hammer; the player then has the option to interact with the gore nest again and start the second, more difficult wave. Completing the second wave will destroy the nest and award a Slayer skin. Each of the two waves has a unique type of gore nest with a golden portal.