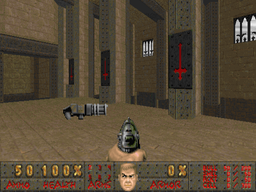 An example of the gothic architecture in GothicDM.

GothicDM (it is named Gothic DeathMatches in the accompanying text file but almost always referred to as GothicDM) is a WAD developed for multiplayer deathmatch play. It was released on July 12, 1997. GothicDM was revolutionary at the time of its release due to its focus on appearance. Replacement textures and detailed architecture were used to create levels which have a gothic appearance. This is combined with music done in a gothic style to give a complete gothic style to the WAD.

A sequel to GothicDM, GothicDM 2, was later released, as well as a later followup, Gothic 99.

Levels for the WAD were made by:

Music for the WAD was written by:

This WAD features four built-in demos showing deathmatch. All require Doom II v1.9 to view them. The demo levels are:

The DSDA episode records for GothicDM are: