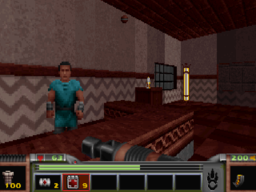 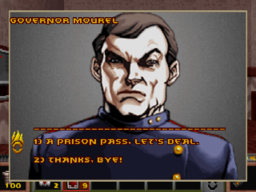 Governor Mourel vents his frustration about the bureaucracy of the Order and demands to know what the Strifeguy wants.

Governor Mourel is a character that appears in Strife. He is the leader of Tarnhill, the town the player starts off in, and owns a mansion south of the tavern. He is a corrupt puppet of the Order. BlackBird also states that "Calling Mourel sleaze is paying him a compliment. He's mongrel turd on a stick!". He is voiced by Jarion Monroe (IMDb).

Mourel can play two different roles in the game depending on the player's actions. His primary role is as a trader with the player after he meets Macil. Macil sends the player to the Governor to obtain a pass to Norwall Prison. Macil adds that the Governor loves making deals despite his allegiance to the Order. When the player talks to Mourel about the prison pass, he will offer an option of two tasks, one being "messy" and the other "bloody".

The messy task involves attempted trickery on Mourel's part, claiming that a minion of his is stealing power from him via a tap on the mains, when in reality he is trying to trick the player into destroying the power coupling that allows the Front to jam the Order's tracking on their base. The player could destroy the coupling and be forced to fend off a search team of acolytes, or wisely avoid the first coupling and find a broken coupling to use as a false token for Mourel to get the pass.

The bloody task involves going to Tarnhill Power Station and to its warehouse, where a corrupt minion of Mourel's known as Derwin is selling children to the Order without paying Mourel his share. Mourel tells the player to kill him and bring his ear back for proof of the deed. Once done, Mourel gives the prison pass.

After getting the pass, the player can choose to kill Mourel for 50 gold that he drops upon death. This only happens when the player has finished business with him. If the player kills him before getting the prison pass, the alarm is triggered, and he will drop nothing.

Mourel's other possible role is to serve as a "dead end" as he punishes the player for taking the wrong course of action with Harris. If the player decides to trust Harris after taking the offering chalice from the Order's Sanctuary, Harris will give the player a key to the Governor's mansion, and Mourel will reveal that the player was used as an unwitting pawn to raise his status in the Order. He will then summon in a flood of Acolytes which will eventually kill the player. Mourel will not react this way if the player does not take Harris's optional task until after getting the prison pass from him in the commercial version.