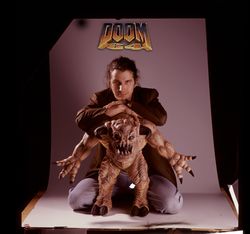 Punchatz with the model of the demon created for Doom 64.

Gregor Punchatz (born 1967) is an artist hired by id Software initially to create models of the arch-vile, mancubus, revenant, and spider mastermind; these were adapted into sprites used in the game by photographing them while placed on a lazy susan and then converting the captured video using custom software. He built these models using steel armatures and foam latex. Greg is the son of Don Ivan Punchatz, the artist for Doom's cover art, and was hired on his father's recommendation when id Software asked him if he knew anyone who did modelling work.

Before working on the Doom models he did similar modelling work for a number of Hollywood movies, including A Nightmare on Elm Street 2: Freddy's Revenge, RoboCop and RoboCop 2. Punchatz has continued to work in the industry in prosthetics, makeup, animation, special and visual effects, and art.