For the grenades in Strife, see HE grenade and Phosphorous grenade. For other versions of this weapon, see: 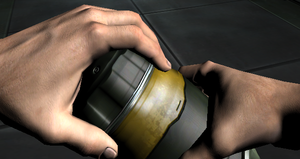 A grenade being carried by the player.

The grenade is a hand-held, thrown explosive weapon in Doom 3.

While grenades are handy for flushing out Z-Secs, it is most useful when thrown directly at an enemy. Imps, vulgars and tentacle commandos will die if hit by one, making it a great alternate to the shotgun if the player does not or can't get close enough to a target for the shotgun to be effective. In addition, it can kill multiple zombies with one explosion. Slow moving enemies such as mancubi are inviting targets. They can also be used to quickly kill swarms of trites and ticks if the swarm is dense enough and the player is far enough away not to be injured by splash damage.

Though grenades can be tough to aim for the inexperienced, they are not too difficult to aim properly once the player is accustomed to their mechanics. The longer the grenade is cooked, the further it can be thrown, and the sooner it will explode afterward. Quickly releasing the fire button and aiming at the ground will allow rolling the grenade across the ground, while a long cook time and a high angle is best for throwing the grenade over cover to hit Z-Secs. Although difficult to pull off at times, a mid-angle bounce against a wall is also possible, to hit monsters behind cover on the opposite side of the wall.

* The rate of fire is dependent on how long the player holds the grenade prior to throwing it, but the maximum rate is 1 per second.
** In Resurrection of Evil and The Lost Mission, a pack of grenades contains eight rather than five.