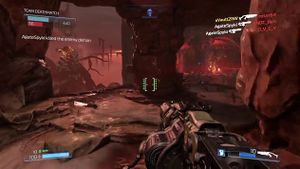 The grenade launcher is a multiplayer-only weapon in Doom (2016) which was initially added to the game in the Bloodfall DLC pack. It is a banned weapon according to UAC policy. It can fire bouncing explosive grenades as its primary mode of attack, and can alternately fire a smoke grenade to provide cover.

The grenade launcher is a powerful long-range weapon. Explosive grenades can bank off walls and ricochet. Indirect splash damage to players will range from around 12 to 30 points of damage. A direct hit on a player will do 55 damage.

Smoke grenades create a large, lingering cloud of opaque smoke at the location where they detonate which can hinder enemy players' vision. They are best combined with immediate attacks fired into the area to take advantage of the cover before the enemy can flee.

The grenade launcher also occurs as a weapon in the single-player Doom VFR. It serves as a side-arm weapon, held in and fired from the player's left hand, which acts as an upgrade and replaces the ability to use regular frag grenades. It is later exchanged for the BFG grenade launcher.