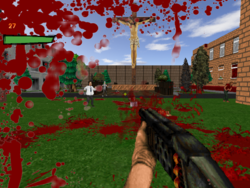 Grezzo 2 (Full name: Grezzo Due - Una Magica Avventura. "Grezzo Two - A Magical Adventure" in English) is a total conversion megawad created in 2012 by Nicola Piro. Notorious for its extreme violence, graphic sexual content, and blasphemous depictions of religious figures, Grezzo 2 received an unusually high amount of public exposure beyond the Doom modding community due to its popularity with Let's Players. Grezzo 2's offensive nature and popularity with streamers led to twitch.tv banning it from their streaming service. To date, Grezzo 2 is the only Doom-derived game to receive such treatment.[1]

Owing to its outrageous, oftentimes nonsensical presentation, Grezzo 2 was given an honorable mention in the 2012 Cacowards.[2]

The original Grezzo was created in 2004, while Nicola Piro was still in high school. According to Piro, Grezzo 1 merely replaced the monster textures, audio, and music of Doom, leaving the levels unaltered. Grezzo 1 was never publicly released.

A public demo of Grezzo 2 was released in late 2012. The game comes prepackaged as 12 separate wads bundled with the Skulltag source port, alongside several other built-in mods which Grezzo 2 is dependent on. The majority of Grezzo 2's assets are plagiarized; many of its maps, textures, monsters, weapons, and audio files have been ripped from other mods, games, and copyrighted media.[3]