Ground Zero is a single-level PWAD for Doom64 EX, first released in 2009 as "Doom64EX Example Level" and then updated in 2011. Ground Zero was designed by Samuel Villarreal (Kaiser) and is also known as Kaiser 24. 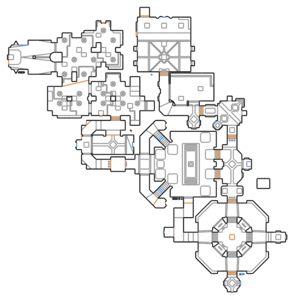 Map of Ground Zero
Letters in italics refer to marked spots on the map. Sector and Thing numbers in boldface are secrets which count toward the end-of-level tally.

* The vertex count without the effect of node building is 1974.

Ground Zero is the name of one of the two official expansion packs for Quake II. Steven Searle, another early Doom 64 level creator, designed a levelset called The Reckoning which is named after the other Quake II expansion of the same name.