Grove is a single-level PWAD for Doom II and the ZDoom source port that came out in 2004. Its author is B.P.R.D and the map uses the music track "" along with title music track " ".

Grove was one of the winners at the 2004 Cacowards ceremony, and was featured in Doomworld's Top 100 Most Memorable Maps, placing 97th. 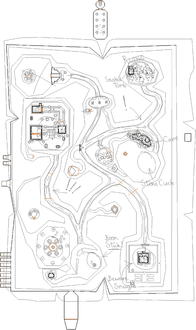 Map of Grove
Letters in italics refer to marked spots on the map. Sector, thing, and linedef numbers in boldface are secrets which count toward the end-of-level tally.

You will start in front of a single-room house. Before entering the house it is wise to head south, through the gate, and into the garden to collect the mushrooms there for extra health, as they will become very dangerous to collect later. Enter the house and take the map from the table; inspecting your automap will reveal a hand-drawn diagram of the whole level to you, which highlights several places of interest and the general areas in which each of the three skull keys are located.

The house contains an electrically-powered door, two bookcases, and a table. Approach the bookcase next to the window; you will notice that one of the books in it is slightly depressed into the case. Press it, then go outside to the back of the house to see that you have gained access to an iron pillar inside of an electrically-wired alcove. There's a switch tucked towards the back end of the pillar. Upon pressing it, the gate to your north lowers and you gain access to the forest. Before going too far down the clearing, be sure to pick up the armor by the gate's western end.

In Grove, ammunition and health are limited, so you will not want to be unarmed for long. Be careful to avoid the spots on the map which are marked with exclamation points - they serve to warn you of monsters which will appear and attack you at those locations (a baron of Hell is marked in the north-east with one exclamation point, and an arch-vile is marked in the west with three). To arm yourself, travel towards the northern half of the map until you reach the oval-shaped room marked with three asterisks. Here you can see three enormous hands sticking out from stone tombs. You cannot interact with them right now. Instead, head to the southwestern area of this clearing, in which there is a valve-post beside a square watering hole. Approach the valve - interacting with it is unnecessary - and then head south towards the marking labelled "Boomstick!". Although it is not visible on your map, you will hit an impassible wall of trees. Travel southwest along the wall until you reach a gap in the trees, which allows you to enter the clearing proper. Within it, locate a small well - now full with water, thanks to your visit to the watering hole - and retrieve the super shotgun inside it.

Now that you're better-equipped, you should be ready to head northwest towards the large area labelled "G.C" (Grove Central). Stay alert as you approach the archvile's crossing. With luck, your super shotgun blasts will cause it to flinch and save you from its attack; running and hiding is useless, as there is no real cover nearby.

Enter Grove Central, and you'll find yourself in front of a brownstone garrison populated by imps. A number of shotgun shells are lying around in the outdoor area; collect them while trying to kill as many of the imps as you can with your pistol so you can save the shells for more threatening monsters later on. When you have all the ammo you need, ascend the staircase. The optional room to your left contains some health if you need it, but also an arachnotron which can corner you in the small area and costs precious ammo to dispatch. To advance, continue to the right. Be prepared to face a pair of mancubi which will teleport in and sandwich you when you're halfway across the L-shaped walkway. After killing them, you can safely enter the control room at the end of the walkway, which contains five switches, of which only two are necessary to press: those labelled "Smugla's Safe" and "Cave Lock". Press them both, and return to the first house you saw at the start of the map.

Beware. Entering the Grove Central control room caused the house's owner, Smugla - a chaingunner with the health of a spider mastermind - to appear in the garden where you collected the mushrooms. Facing him is unwise due to a lack of nearby cover to dodge his gunfire and the critically low ammo you'll be left with after the fight, but if you do manage to kill him, you can easily claim a secret megasphere in the newly-opened outhouse to the southwest. Duck into his house and you will see the electric door has opened to reveal the top half of a dead arch-vile. Approach it and you will remove its head for use as your yellow skull key. Make your escape and head north to the shaded area labelled simply "Cave", whose entrance is marked with an arrow on the map. To enter it safely, you will need to dispatch the baron of Hell that the map warns you about.

With the baron dead, enter the cave. Be careful navigating it, as it offers little room to move and contains a Hell knight who can ambush you. Kill it to claim some shells and health pickups from its nook. On the map you'll notice the western end of the cave comes to an abrupt end, and travelling there will reveal an upwards staircase that terminates in a wall with a distinct sigil painted on it. To open it, return to the first crystal that you saw while entering the cave. It's difficult to notice in the darkness, but you can see a much smaller version of that same sigil painted on the right side of the ledge of the upwards step leading back towards the cave's entrance. Press this smaller sigil to open up the larger one as a door, then exit the cave through it.

Travel through the clearing and you will emerge into the cemetery; if you attempted to travel here from the front entrance, you will have been stopped by a wooden blockade warning of the active spirits there. Indeed, once you enter the cemetery you will be ambushed by a pack of spectres. Dispatch them and check behind a grave in the southwestern corner of the graveyard to find the red skull key. Now, exit the cemetery the same way you got in.

When you exit the cave, head south into the area labelled "Stone Circle". You will emerge into a clearing in which you must locate the circle which the map is referring to; however, the clearing is much larger than the map's outline would imply, and your destination is well outside it as a result. The stone circle is located to the west of the upper edge of the outline provided by the map; it's very difficult to see, however, due to the low lighting and its small size. When you step over this stone circle, you will be teleported to a much larger one in the southwest of the map. You will be ambushed by imps and demons here, and a pillar will rise to block your escape back through the teleporter. Run to the north and hit the skull switch on the marble pillar; this will open up the sealed tomb located in the far northeast of the map. You will notice a ring of eight gargoyle switches surrounding the clearing. The southeast gargoyle switch will lower the pillar and allow you to leave the clearing, while all the other gargoyle switches simply cause additional monsters to teleport in. The southwest gargoyle switch, however, has a hidden marble skull switch on its rear side, which you should hit. With the pillar lowered, step into the center of the large stone circle to teleport back to the small one in the northeast. Head southwest from here and, if you pressed the skull switch, you will now be able to find a hidden path leading to the map's sole backpack, a box of shells, and some medikits. From here, leave the clearing and head north to the area marked "Ruins".

Prepare for combat as you approach the ruins; a pack of three revenants will appear from within the now-unsealed tomb and attack you. Kill them and enter their tomb, where you will find a nook containing a collection of shimmering gemstone skulls. One among them is the blue skull key, which is free for the taking.

Now that you have all three skull keys, return to the area with the three entombed hands and interact with all three of them to grant them the power of the skulls you've assembled. You may now head north towards the area marked by a keyhole. A large stone wall in this area has opened up, revealing your final obstacle: a troop of five Hell knights and five barons of Hell. You do not have room to run past them and must engage them head-on, so if you have not been conservative with your ammo, you could be in very serious trouble here. If well-equipped, make your shots count and you should be able to dispatch them - or at least kill enough to make space and run through.

When you finish the fight and emerge through, you will witness a pillar of starlight soar forth from the cracked earth. Step into it, and you have escaped the Grove.

* The vertex count without the effect of node building is 5651.