"My Guardian will destroy you!"
― Betruger [source]

The Guardian of Hell, also simply known as the Guardian, is the second boss in Doom 3, and the final boss in The Lost Mission. It is first seen in Doom 3 when the player reaches the end of the Hell level. This crocodilian-like demon stands more than 15 feet tall, just a little over 2.5 times taller than a human soldier. It guards the Soul Cube and the player must defeat it to obtain the Cube.

The Guardian looks vaguely like a crocodilian, but with a taller and broader jaw, and larger and more muscular arms ending in large round fists that appear to contain cracks full of lava, muscular legs with hooves, a hunched upper body, a very long tail that ends with a ball with cracks full of lava in it, an armored back with traces of lava, and a head that has stereotypical demonic horns. The designers commented in the Making of Doom 3 book that the Guardian was created with the idea of a pre-human Hell during the prehistoric age, and it was something that dinosaurs feared and perhaps made them go extinct.

Its refuge is a large area of Hell that is filled with pillars of rock with slabs of demon flesh that can be seen strewn on some of them.

Its primary attacks consist of punching with its large fists and pounding the ground, which emits large spheres of energy that burst from the Guardian in all eight directions. It can also charge at the player.

The Guardian's tough hide renders it invulnerable to all forms of weapons' fire. The only way to harm and kill this goliath is to take out its seekers. When all the seekers are dead, the Guardian stops and forms a blue sphere above its head which generates more seekers. This blue sphere is the Guardian's only weakness.

The Guardian of Hell is blind due to its age; what remains of its eyes are shallow pits.

It summons much smaller creatures dubbed seekers, three at a time, to "see" for it and locate its targets. The seekers do not attack the player themselves, but they light the area and alert the Guardian to your location with a shrill noise.

Killing the three seekers forces the Guardian to generate more of them, revealing its vulnerable spot: a glowing orb of energy in an opening on the Guardian's back. Shooting this orb is the only way to kill the Guardian. As you fight the Guardian, the Soul Cube will inform you of this weakness.

The guardian is relatively easy to kill if you can manage to avoid the energy spheres. Kill the seekers with the plasma gun or the rocket launcher, and when the glowing energy orb appears, unload your chaingun into it. This should kill the beast in four rounds (three if you aim well). It is also possible (although difficult) to kill the monster using two charged BFG shots. It is extremely rare, but possible, to kill the monster in one fully charged shot, due to the high damage output stripping the monster of all its health.

Note that in Nightmare difficulty, the Soul Cube (already in the player's possession) will not damage the Guardian, but will return your health. Seekers are therefore an important source of health if battling the boss on the hardest difficulty.

After killing the beast, the Soul Cube is released.

Unlike most other demons, the Guardian's body does not dissolve. 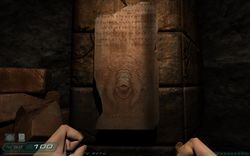 A stone tablet depicting the Guardian.

In Resurrection of Evil, the head of the Guardian can be seen engraved on several stone tablets. This could be interpreted in several ways: that the Guardian left Hell to assist in the invasion of the ancient Martian civilization, that members of the civilization encountered it in Hell, that there may be more than one Guardian (a supposition supported retroactively by The Lost Mission), or that it was simply aesthetically pleasing to the game's designers.

A variation of the Guardian appears in Doom 3: BFG Edition's Lost Mission campaign as the final boss. Unlike the original Guardian, this creature does not use seekers and does not have a particular weak spot that needs to be exploited. It teleports into the remains of the Hell Outpost at the end of the mission, and the player must defeat it in order to secure destruction of the Exis bi-directional teleporter and escape from Hell.