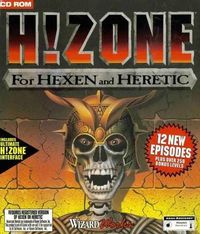 H!ZONE is an expansion pack for Heretic and Hexen that was created by Simply Silly Software and published by WizardWorks. It contains over 250 levels for both games, including 12 exclusive episodes for Heretic.

Distinguishing H!ZONE from most shovelware compilations is the inclusion of some original WADs by WizardWorks. These include the twelve Heretic episodes (nine for single-player and three for deathmatch) and also some Hexen versions of the levels. The Heretic episodes include some new textures and new sprites. The undead warrior is replaced with a human enemy and the iron lich becomes a blue tentacle. These changes are cosmetic and do not alter the enemy behavior. Due to the inclusion of new sprites, the Heretic episodes are installed by a method that alters the Heretic IWAD. These episodes all replace the third episode, The Dome of D'Sparil.

Outside of the original levels, however, H!ZONE is a typical shovelware compilation, and some WADs in the shovelware section are missing text files. It also includes several utilities, such as DOOM-IT and various level editors, and documentation such as editing tips.

As with other entries in the D!ZONE series, H!ZONE includes a version of the D! frontend, developed by Simply Silly Software.