Halo Of Wonders is a single-level PWAD for Doom II that requires a limit removing source port. It was created by Samuel Villarreal (Kaiser) in 2004, is also known as Kaiser 14, and uses the music track " ".

Through a DeHackEd lump, Halo Of Wonders provides a modified BFG9000 with a red barrel that shoots red plasma projectiles. The final boss, which replaces the Wolfenstein SS, is named "Cow" – although it looks very different from earthly cattle – and has a massive 16000 hit points. 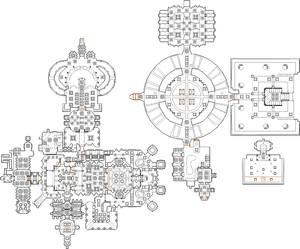 Map of Halo Of Wonders
Letters in italics refer to marked spots on the map. Sector numbers in boldface are secrets which count toward the end-of-level tally.

* The vertex count without the effect of node building is 17486.