Hanging Gardens is a single-level PK3 for Doom II and the GZDoom source port that came out in August 2011. It was designed by Paul DeBruyne (skillsaw) and uses a music track from Epic Pinball.

Rocket zombie
A rocket firing zombie with 50 hit points (does not actually occur in the level).
Suicide bomber
A zombie with a stick of dynamite that runs screaming towards the player and explodes on contact. Has 80 hit points.
Archon of Hell
A powerful black-and-red skinned Hell noble with multiple attacks and 2000 hit points. 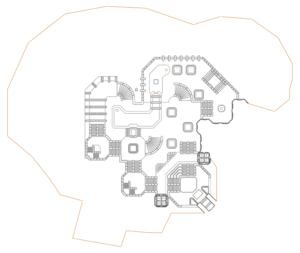 Map of Hanging Gardens
Letters in italics refer to marked spots on the map. Sector, thing, and linedef numbers in boldface are secrets which count toward the end-of-level tally.

Stay on the move in this level, as it is densely packed with enemies. Collect the weapons, ammo and armor around you while you wait for the floor to carry you up to an area with many imps and two mancubi, plus eight demons on Hurt Me Plenty skill level or higher. Head west up two flights of stairs to a platform with Hell knights, then head north down some more steps to a structure containing an arachnotron before heading west to a platform with a mancubus. Head up one more flight of stairs next to the mancubus to find a baron of Hell guarding the yellow keycard.

Go back to the structure with the arachnotron then head north across a bridge to a pool of green water that contains numerous imps. Follow the water east and north until you pass under three arches and reach the top of a waterfall; if you run north off this waterfall then you should land on a platform below with two boxes of rockets, two energy cell packs and the red keycard. Run east to leap over a pit and land on solid ground, then head due east past more arachnotrons until you reach some steps leading up to a raised ledge with imps and barons guarding a supercharge; pressing the lion switch opposite the supercharge will lower a pillar to the south holding the blue keycard, but you will have to fight your way past numerous enemies (including suicide bombers) that teleport in to defend it.

With all three keys, return to the starting point and open the large gray door here to find two archons of Hell (or three on Ultra-Violence and Nightmare) guarding a megasphere as well as energy packs and boxes of rockets. Once all the archons are dead the door behind them will open; press the satyr switch behind this door to finish the level.

A BFG9000 and four energy cell packs can be found in the north-west corner of the level, guarded by some mancubi.

A plasma gun can be found on the bottom floor of the level, north-east of the platform with the yellow key.