Happy Time Circus is a map by Rachel Schmitz (Negatronica), released in 2005. It received a special award at that year's Cacowards, under the category What the Hell!? as "the strangest level released this year".

shitbag credited the concept to his brother, who mentioned "a circus level that would scare little kids". The mod features numerous custom enemies, garish set design with strobing light effects, and an evil clown inspired by the film IT. 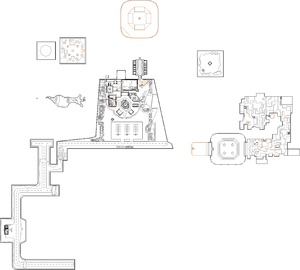 Map of Happy Time Circus
Letters in italics refer to marked spots on the map. Sector numbers in boldface are secrets which count toward the end-of-level tally.

* The vertex count without the effect of node building is 7444.