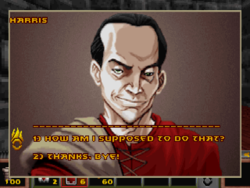 Harris promises riches if the Strifeguy does a dangerous job for him.
For information about the Columbine shooting participant who made Doom levels, see Eric Harris.

Harris is a character that appears in the first level of Strife, both in the demo and commercial versions respectively. Depending on the version of the game, his role in the game slightly differs.

In the demo version, Harris appears in the room where Rowan is met in the registered version. Harris tells about the offering chalice in the Order's Sanctuary and offers great riches if it is retrieved. If the player accepts his offer (rejecting causes a flood of Acolytes to appear and kill the player), he tells the player to meet him at the tavern.

Near the back entrance of the Sanctuary, the prison cell holds someone who claims Harris took advantage of him and got him into trouble on false accusations. Returning with the chalice to the tavern makes the alarm inside go off, so the player will confront Harris. Harris claims he was not trying to set the player up and continues to offer riches. Upon agreeing, the player is given the key to Governor Mourel's mansion, which is a dead end as the Governor summons Acolytes to kill the player for stealing the chalice. Rejecting Harris' offer at the moment gives the chance to reveal a hidden button, leading to a stash of items, including a Front com link that allows the player to hear BlackBird for the first time.

In the commercial version, Harris's task is optional. Basically the job is the same, to get the offering chalice. However, if Governor Mourel's chore for the prison pass is not accomplished, it does not matter how the player chooses to handle Harris after confronting him later. The player becomes stuck anyway, since the Governor will know of the theft of the chalice, resulting in the player's death by a flood of Acolytes. It is possible to wait until getting the prison pass to take Harris's task. Killing him in the registered version allows a similar hidden button to appear, leading to a stash of poison bolts, a hundred gold coins, a surgery kit and a targeter.

There is an easy way to get Harris's treasures early in the game, without making the Governor a dead-end character. The player simply needs to talk to Harris and accept his task, but not do it. If the player kills him in a stealthy manner after acceptance, the switch will appear instead of the alarms being activated. It only works in the commercial version of the game.

In Strife: Veteran Edition, Harris's task is identical to the original commercial version by default, with one exception: when the player reports to Governor Mourel, the Governor will have an Acolyte knock out the player and drag him back to the interrogation room at the start of the game. New Acolytes will be posted inside and in front of the interrogation room, which the player must again escape from. Additional Acolytes will be seen patrolling Tarnhill, but like the already-existing guards, they will not attack as long as the player does not fire an electric bolt or any firearm. The player may otherwise proceed through the game as if nothing happened; Governor Mourel will interact with the player as he normally would, either because he has already gotten what he wanted, or because he fears the Strifeguy's prowess now that he has escaped interrogation twice. Only Harris behaves differently, giving the same line of dialog he would if the player tries to talk to him after getting the key, since his task is already completed. These changes ensure that it is no longer possible to create a dead-end scenario via Harris's job. The player may return to Harris and kill him for his treachery; doing so will still reveal the hidden button that opens his stash.

Enabling "Classic Mode" in the launcher's options menu will revert Harris's scenario to its original commercial version behavior, up to and including making the Governor a dead-end character.