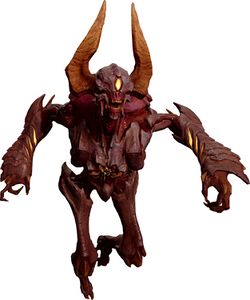 The harvester is a multiplayer-only monster from Doom (2016), officially added to the game's demon rune via the Unto the Evil downloadable content pack. As of the update to v6.66, the harvester is available to all owners of the game, and is unlocked through player progression at level 21 of the first echelon.

The harvester is a tall demon with an appearance similar to the summoner, but with a body which appears similar to an arthropod exoskeleton made of bone. Other differences include its two distinct horns, a yellow, energy-filled void in the center of its chest, and a single oblong yellow eye on its forehead. It is said to consume souls using its lightning energy.

According to information in The Art of DOOM, the harvester is a minor demon lord and is rarely observed due to its duties in guarding the inner areas of forts and keeps in Hell. It has an insatiable hunger for human souls, which it uses to power its attacks by converting the souls into Hell energy. A stomach sack on the creature's back was meant to hold the souls until they were needed, and would inflate as it filled up.[1] 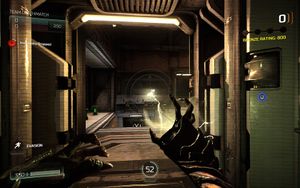 The harvester can drain the life of its enemies using a damaging short-range lightning attack. A more powerful attack consisting of multiple explosive green plasma orbs can be unleashed periodically via inflicting damage with the lightning attack, which charges the detonation meter (a round seal in the center of the HUD). The short range of the lightning attack is the monster's greatest weakness, alongside its relatively low hit points. An advantage of the harvester is its speed: in contrast to slow behemoths like the baron and mancubus, the harvester can dodge incoming attacks with enough space and some practice.

As there is no apparent speed penalty for use of the lightning attack, it is recommended to keep firing it continuously while playing as the harvester, since enemy players may appear without warning. 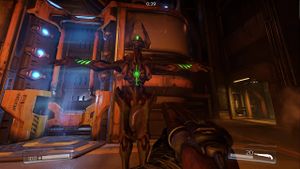 The alpha version of the harvester.

The harvester was first found by data miners examining the files used by the Doom closed multiplayer alpha test, though it remained unidentified until its official announcement. At that time, the monster possessed dramatic neon green patterns on its arms and chest. In the final game, this occasionally appears as a transitory effect as the demon moves around.