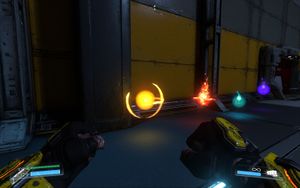 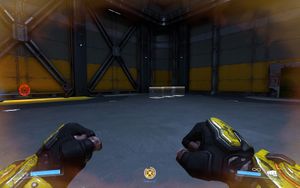 The visual effects of haste.
This article is about the item in Doom (2016). For other versions of this item, see:

Haste is a power-up which occurs in Doom (2016), both in single and multiplayer games, which grants the player a period of dramatically increased speed. According to the UAC, the haste sphere contains a charged cloud of Soul-Breaker energy. When the sphere is disrupted, the energy accretes around the user as a temporary exoskeleton which accelerates the speed of all natural movement. Also according to the company's research, most subjects cannot survive the experience, and suffer a literal explosion of their heart once it wears off.

Haste lasts for 30 seconds, during which the player can move and turn faster, and can fire and reload weapons at a faster rate. While in use, a yellow haze surrounds the borders of the player's view, and swooshing sounds are made any time the player changes the direction in which they are moving.