This is the stable version, checked on 9 July 2020. 3 pending changes await review.
This article is about the weapon in Doom Eternal. For other versions of this weapon, see: 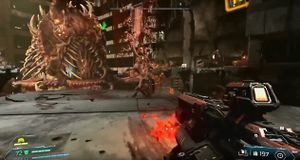 The heavy cannon in use during the 2018 reveal

The heavy cannon is a multi-purpose automatic rifle which occurs as a weapon in Doom Eternal, replacing the heavy assault rifle from the previous game, with some changes to the modifications and upgrades, although they both function similarly with each other. It is introduced in Hell on Earth, after the second demon encounter.

The heavy cannon is a reliable weapon at medium to long range, requiring no more than two body shots to kill most Fodder monsters. It is not as effective against stronger foes on its own, but can be used to supplement other weapons at long range.

The precision bolt greatly increases the weapon's accuracy and also deals extra damage to weak spots, enabling one to destroy, for example, the arachnotron's cannon or the revenant's rocket launchers. Using the precision bolt is also the best mod to use to kill Maykr drones as they drop a considerable amount of resources once killed with a headshot. By contrast, micro missiles are best used to deal area-of-effect damage without risking the self-inflicted injury that would come with using the rocket launcher in close quarters.

Precision Bolt
Adds a scope to the heavy cannon, greatly increasing its effective range when aiming down the sight. The heavy cannon fires slower and uses six bullets per shot when using the scope, but deals more damage and receives a bonus when targeting weak points. Its shots can also pierce weaker monsters.
Micro Missiles
The micro missile mod provides a dramatic temporary power increase, allowing the firing of up to six explosive missiles which detonate on impact. The missiles have minor homing abilities. Reloading is necessary in between salvos.

The heavy cannon is built from Tungstronium, a proprietary alloy developed to withstand the stresses from the explosive darts it can use as ammunition. Its great weight, while a common complaint among users, makes it an effective sniper weapon as it reduces the effect of swaying and tremors. Its no-pull reflex trigger system demands excellent trigger discipline in order to prevent self-inflicted gunshot wounds.

The heavy cannon is one of the two main weapons that the Doom Slayer starts with during a modified version of the Super Gore Nest level (in which it is accurate to begin the level with the heavy cannon, as it is obtained much earlier), the other being the Super Shotgun. It is noted that throughout the gameplay reveal, the micro missile mod has yet to be seen at that time, hence, only the Precision bolt mod is used all throughout.