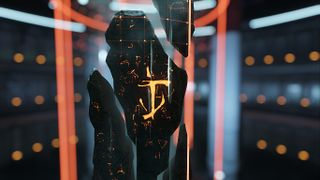 The Helix Stone can be seen several times in the violent psychic visions experienced by the Doom marine during travel between different areas and when coming into contact with other items involved in his history, such as the Praetor suit. After returning to the Argent Facility from the Kadingir Sanctum, the marine is directed by Dr. Hayden to a computer terminal that contains information concerning the Helix Stone, although it is not named at this point; Hayden believes that the marine will be able to gain more information from the stone as it bears his mark.

The Stone is finally encountered when the marine enters the Lazarus Labs, at which point the Stone shows him the location of the Crucible within the Necropolis. Through some unknown mechanism, Dr. Hayden and VEGA are also able to sense or otherwise detect the information which is revealed to the marine. Hayden claims that it is the Crucible that Olivia was after all along, and sends the marine on a quest to return to Hell and retrieve it. VEGA quickly determines that this necessitates facing the cyberdemon, as the Argent accumulator it carries contains the only sufficient concentration of energy left to open an accessible rift.