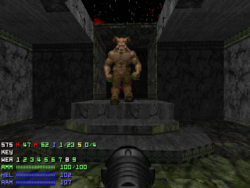 A Hell knight guards the Partial invisibility sphere in TNT: Evilution MAP16: Deepest Reaches.
This article is about the monster in the classic Doom series. For other games, see:

The Hell knight is an enemy introduced in Doom II, a weaker version of the baron of Hell. This new monster has a tan torso, as opposed to the baron's pink coloration. The manual for Doom II describes the Hell knight as follows: "Tough as a dump truck and nearly as big, these Goliaths are the worst things on two legs since Tyrannosaurus rex". The same description was previously used for the baron in the original Doom manual.

In terms of gameplay, the Hell knight is identical to the baron of Hell, merely with half the hit points. As a result, it is a medium strength monster that is more vulnerable than the baron to small arms fire (eg., the shotgun or chaingun), but much more durable than an imp. It allows Doom II maps to host a weaker monster, albeit with high attack power, giving the player a decent amount of challenge without slowing down the action.

Hell knights emit wake-up and death cries similar to those of the baron of Hell, though higher in pitch (and in the case of the death cry, shorter in length and raspier). Possessing 500 hit points, Hell knights present a significant challenge to the player, although less than that of a boss monster. Hell knights have both melee and distance attacks, scratching at close range and throwing green fireballs from a distance. Their attacks are identical to and just as lethal as those of the baron.

Since Hell knights have half the hitpoints but the same amount of potential damage to the player, two barons of Hell would be significantly easier than four Hell knights. Most maps will avoid "packs" of Hell knights for this reason.

Hell knights and barons of Hell throw the same projectiles. Contrary to popular belief, this has nothing to do with the fact that Hell knights and barons do not infight with one another in the PC version of the game. Rather, there is a hard-coded exception for these two enemies which causes them to consider each other as belonging to the same species. This exception was overlooked when the Doom II source code was combined with the Atari Jaguar code base to create the Sony PlayStation port of Doom II, and as a result, barons and knights infight in both that game and its offspring, Doom 64. The only way for barons and knights to infight in the PC version of the game is for one to damage the other with a barrel.

In the IWADs the Hell knight is first encountered on these maps per skill level:

The IWADs contain the following numbers of Hell knights per skill level:

Of the maps covered on the Doom Wiki, the following have the highest numbers of knights in single-player: 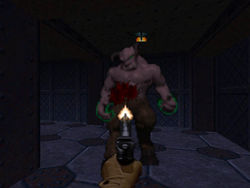 A Hell knight in Doom 64

Though overall similar to the standard Hell knight, the variant found in Doom 64 is less pale in color, and more closely resembles Doom's baron of Hell.

One quirk of the game is that they can deal and receive missile damage to and from barons of Hell, so infighting between the two monsters is possible.

In Doom RPG, the baron of Hell and the Hell knight both belong to the "baron" monster class. There are three variations, identified by color:

As in the original, the Hell knight is not as powerful as the baron, though both are more powerful than the new "ogre" variation. Unlike the original, his legs are purple. This class of monster is especially weak against attacks from shotguns.