Hell Revealed (HR.WAD) is a 32-level megawad for Doom II, released on May 2, 1997. It was created by speedrunner Yonatan Donner and his friend Haggay Niv. This megawad was designed with full skill level support to allow unskilled players to complete it, and yet also provide "extreme challenge" for the best players.[1][2] The latter is the best-known feature of Hell Revealed, with the result that it has had the most speedruns recorded of any PWAD. Thus, it is one of a few PWADs that are legal for competition in the Compet-n. A sequel, Hell Revealed II, was released in late 2003, created by a new team with Yonatan Donner's approval.

The megawad also includes a custom soundtrack in a separate file, HRMUS.WAD. It was compiled from music in Rise of the Triad that was written by Lee Jackson and Robert Prince, although the megawad's text file suggests Donner and Niv planned to release an update with original music[3]. Levels 20-26, 28 and 30 reuse the music from Doom II.

Three official demo packs were released for Hell Revealed. The first, Hell Revealed Help Demos (hrhelp.zip), is a collection of demos recorded on Ultra-Violence in no monsters mode to show how to complete each level with 100% secrets. The only exception is the demo for MAP07: Arachnophobia, which was recorded on I'm Too Young to Die because the level is not possible to complete without monsters.

The remaining two packs are UV max demo collections. The first, the Hell Revealed UV LMP Collection (hruvlmps.zip), was recorded by Yonatan Donner, Kai-Uwe Humpert, Daniel Lindgren and Peo Sjöblom, with a total time of 9:34:22. The demo for MAP25: Dead Progressive, a 5:00 demo recorded by Humpert, was the winner of a brief UV max competition on that level run by Donner shortly after Hell Revealed's release, whose demos are collected in hr25lmps.zip on the official website and available individually on the WAD's Doomed Speed Demos Archive page.

The second, the Hell Revealed UV LMP Collection 2.0 (hruvlmp2.zip), was recorded with the same team minus Lindgren but including Anders Johnsen, Adam Hegyi, Esko Koskimaa, Henning Skogstø, and Jonas Feragen. In this pack, two demos each are provided for MAP26: Afterlife and MAP30: Hell Revealed. MAP26 has a demo without ghost monsters and one demo with them, and MAP30 has one demo without 100% Kills and one with them. The total time with MAP26's ghost monsters and 100% Kills on MAP30 is 5:42:42, saving three hours, 51 minutes and 40 seconds. The pack also includes UV -fast demos for 20 of the levels, including an extra demo for MAP01: Into the Gate additionally recorded in UV Tyson style by Peo Sjöblom.

All UV max and UV -fast records set by these demo packs have since been beaten by the players of the Compet-n. 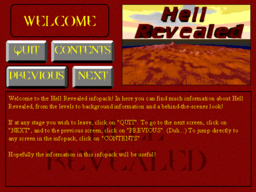 The welcome screen of the infopack.

Like Memento Mori and Memento Mori II, Hell Revealed has an "infopack" available separately from the WAD, contained in hrinfo.zip. Like that of its later contemporary Requiem, it is a 16-bit Windows application, meaning it will not run in 64-bit versions of Windows without emulation or the use of a virtual machine. It was created by Yonatan Donner using Astound, a then-popular presentation program by Gold Disk Software; a splash screen advertising Astound appears when the application is closed.

Because of the program used to make it, the infopack takes the form of a slide show presentation. It takes up the entire screen, with the space not covered by the graphics colored a solid black. The user is shown a section header, a screenshot, a big text box, and four clickable buttons: one to quit, one to see the table of contents for the slide show, and two to go to either the previous or next page of the presentation. The first page is a welcome screen, followed by an introduction to the WAD, gameplay information, credits, information on the demo pack, the story, and individual pages for all 32 levels. It concludes with a humorous "Behind the Scenes" page quoting conversations between Donner and Niv, and a "Thanks" page that includes thanks to two people "for disturbing us all the time and not letting us work". While the program runs, Lee Jackson's arrangement of Henry Purcell's "Music for the Funeral of Queen Mary" for Rise of the Triad plays in an endless loop.

The WAD's story is tongue-in-cheek and only five sentences long. The marine wakes up with a visible status bar along with a pistol and 50 bullets, put in an infested "jumpgate" lab by "two mad WAD creators." The marine must use the jumpgate, discover their mission, finish every level and "send a letter of complaint to the madmen who sent [them] here." Reading the rest of the story requires one to "send $500 to us" or "enter a nuthouse." The last sentence explains that "This is Doom, man - just go in there and kill!"

This WAD features six built-in demos. All require Doom II v1.9 to view them. The demo levels are:

The Compet-n episode records for Hell Revealed are:

Hell Revealed is contained in a zip file called hr.zip. It is 2,322,399 bytes in size and contains 4 files:

Episode 1 (11 maps) was released in 1996, with a different MAP01. The music was also contained in a separate PWAD but was completely different from the final version.