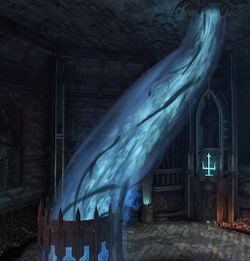 Hell essence is a form of energy produced using the souls of mortals in Hell and harnessed to help create Argent energy.

When a mortal is taken to Hell, their soul turns into Hell essence over the course of millennia and coalesces into a physical substance that gathers in an area of Hell known as The Well, while the mortal's empty husk transforms into a demon. The demons feed off this essence in order to invigorate themselves for battle, but the Maykrs discovered that the full potential of the essence could be realized by introducing it to the energy produced by the Elemental Wraiths. Additionally, it was found that Hell essence can be actively harvested by torturing the mortals of Hell and extracting their souls with the Maykr-made Evulsor. Thus, a deal was struck between the Khan Maykr and the Dark Lord, whereby in exchange for the Maykrs giving them more worlds to conquer, they would be allowed to siphon a portion of Hell's essence.

Hell essence is manufactured in the Nekravol, where it is combined with Wraith energy and becomes Argent, which then flows directly to Urdak.