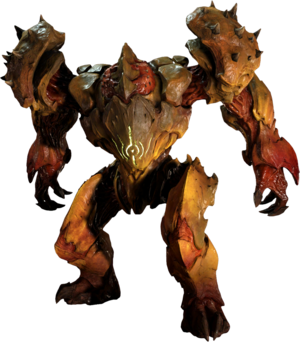 The Hell guard is a biomechanical golem-like monster in the 2016 Doom inhabited by a small, worm-like demon which controls the larger body. Three of these entities serve as the guardians of the Crucible at its resting place deep inside the Necropolis, and act as the boss of that level.

The first of the three Hell guards is protected by a shield that only dissipates when it attempts to attack. Its primary attacks are charging and swinging its staff, and a leap and ground slam towards the player (similar to that of the Hell knight in terms of blast radius, albeit more powerful). It can be staggered during its secondary attack by detonating the charging yellow orb just before multiple orbs of Argent plasma are fired toward the player in a cone. At lower health, it executes a fiery spin while shielded and a weapon throw that sends fireballs hurtling back toward it as the weapon flies in a circle around the battlefield.

The first Hell guard is fought alone, but the second and third are fought simultaneously. The second Hell guard focuses mainly on melee attacks, using a hammer-like swing attack, a large and powerful ground slam attack (preceded by rising into the air), and a spinning attack similar to a top that follows the player. It can close distance quickly by executing a roll. The third Hell guard is primarily focused on ranged attacks, and has a primary attack of firing a large ball of Argent plasma at the player. It will also dash toward the sides of the battlefield quickly, simultaneously hurling three fireballs in a row in the player's direction. It can accidentally stagger its ally for a short time if the ally is in the plasma ball's line of fire.

The lock-on burst modification for the rocket launcher is recommended.

Each of the Hell guards has a separate glory kill animation.

Purportedly, the UAC was never able to capture a Hell guard due to their power and ferocity, nor were they able to isolate the parasite that powers the biomech unit, as it was too fragile to survive transportation on its own. The first Hell guards were encountered by UAC scout-bots during the second Lazarus tethering operation with designation 2147/016, between the Great Steppes and the Titan's Realm. Only minimal data was collected before the bots were destroyed.

However, despite what is mentioned in the lore, four specimens of the Hell guard parasite can in fact be found in the Lazarus Labs facility, floating inside stasis tanks adjacent to an automated operating table on which a mancubus is slowly being pieced back together. For this to be consistent, the lore must either be considered as being out of date in the context of the story, or possibly written to be deliberately misleading to those without the highest levels of access to the Lazarus research projects. Alternatively, the specimens found in these stasis tanks could be the preserved results of previous efforts to capture a Hell Guard parasite alive.

Pre-release versions of the game contained strings which referenced two monsters referred to as "Olivia's Guards," which were to be named Abaddon and Apollyon. Other strings in the executable indicate that they were to cooperate in the same way as the Hell guards do when there are two present, and that they had the same attacks and actions, including a "tantrum" wherein they strike the ground with their club, a "pool ball" attack which ricochets them around the arena while protected by their shields, and beam and hammer attacks. From this, it is evident that Olivia's guards were repurposed into the Hell guards for the final release version.

Information in The Art of DOOM indicates that the earliest concept for the Hell guards was originally called the "Twins", and was meant to be two demons inhabiting a single body and competing violently for its control. When challenged in battle, the two would sometimes split apart temporarily by projecting a separate mirrored form for the other demon to control. Concept art for a worm-like demon called the "Abaddon pilot," significantly larger and more developed than the final game's parasite, is also depicted in the book.[1]