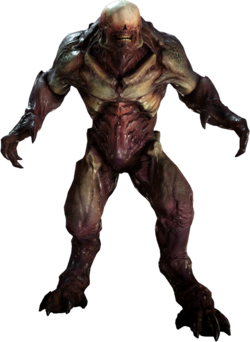 A Hell knight.
This article is about the monster in Doom (2016). For other games, see:

The Hell knight is a monster reappearing in the 2016 Doom. While nominally based on the classic incarnation, it is strikingly similar in appearance to the monster's Doom 3 version, albeit slightly less broad in the chest, and with a skull which appears mostly devoid of flesh on the braincase. It stands slightly taller than the player with a very muscular build, including clawed hands and feet. It is a fierce and relentless melee attacker, using punches and hammer-like slam maneuvers while chasing the player at high speed across any sort of terrain.

In contrast to its previous incarnation in Doom 3, this Hell knight is very fast and uses no ranged attacks in favor of leaping to hit the player. The best tactic is to either stay at arm's length from it and keep firing, or stun-lock it with successive shotgun blasts at point blank. Although it is heavily armored, a fully charged Gauss cannon headshot will kill it in one hit.

On very rare occasions, Hell knights may engage in combat with imps.

The Hell knights are described by the UAC and by tablets found on the Great Steppe in Hell as "prized gladiators" with a history of rises and falls in power over the long ages. They were said to have flanked an entity known as the Great Serpent as personal servants in Hell's first age, but this lord was defeated by another power known as the Guardian. As a result, the Hell knights were cast into the battle pits of Hell and forced to fight to the death for the entertainment of the demonic lords. In the fourth age, however, they now guard some of Hell's most important relics.