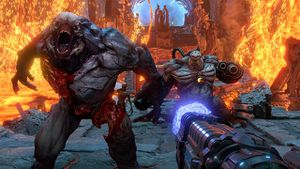 A hell knight roars at the Doom Slayer. It is missing some flesh on its chest and left leg. A mancubus is seen in the background.
This article is about the monster in Doom Eternal. For other games, see:

The Hell knight is a returning demon in Doom Eternal. It is similar to its Doom (2016) counterpart and, by extension, its Doom 3 counterpart. The demon's appearance appears to be a refined composite of its appearances in both Doom 3 and Doom (2016), featuring the former's eyes and general skull shape, in addition to some added nuances exclusive to Eternal that bring it closer in style to the other demons. Additionally, in tandem with the new destructible demons system, the knight's face can be damaged to reveal a yellow skull that is similar in shape to the heads of the barons in both Doom Eternal as well as the 2016 game.

Hell knights behave much as they did in the previous game, rushing towards the player to pummel them with hard-hitting melee strikes and ground slams. As before, it is advised to keep a distance from them and keep shooting at it. The chaingun is especially good at this since its Energy Shield mod can act as a failsafe in case it gets close enough to attack.

The Hell knights' instinctive respect for the infernal hierarchy is considered unusual, and they have served as enforcers for the Archdemons for generations. Throughout their lives, they employ brutality to command lesser demons, and they utilize their warrior strength to destroy Hell's foes.