Hell on Earth is the first level of Doom Eternal, taking place in the ruins of a futuristic New York City. The game begins with the Doom Slayer seeking the first of the three Hell priests, Deag Nilox; after finding and killing him, the Slayer traverses the ruined city until he reaches a demonic citadel where a Deagic Council between the remaining priests and the Khan Maykr is taking place.

Zombies, blaster soldiers, imps, arachnotrons, cacodemons and tentacles are all introduced as enemies in this level. The combat shotgun, chainsaw, heavy cannon and frag grenade are also found in this level.

"Against all the evil that Hell can conjure, all the wickedness that mankind can produce, we will send unto them...only you. Rip and tear, until it is done."
― Introductory voice-over

Kill the zombies in front of you then go through the wooden door and practice glory killing the zombie behind it. Turn left and go down the ramp to a human storage area to find the chainsaw - if tutorials are enabled then you will be transported to a small room to practice using it on three zombies. Walk through the storage area to find a punchable block and strike it, then climb up the block to enter a room containing the first modbot of the game; pick whichever shotgun modification you wish then head through the doorway beside it, practice using your new mod on the zombies ahead then punch the cracked wall at the end of the hallway to enter an arena with zombies, imps and blaster soldiers. Once all the soldiers and imps are dead a door at the other end of the arena will open - go through it to find a Codex page (see the Collectibles section below) then open the door ahead to confront Deag Nilox.

After the cutscene, head towards the building in front of you to find another Codex page then climb up the ledge to find another modbot - use it to get the second shotgun modification and trigger a pop-up about mod swapping, then punch your way through a cracked wall behind the modbot and head forward until you drop into a crater. Turn right and climb up a ledge guarded by imps and blaster soldiers, then follow a trail of armor shards to a monkey bar that you can use to swing into the next arena where an arachnotron and other demons are waiting - try using the shotgun's sticky bombs to destroy the arachnotron's turret and make it easier to kill. Once all significant opposition has been destroyed a gate will open at the top of the arena; follow the objective marker to go through the gate where you will find the heavy cannon.

Jump over the block on your left to enter the ravaged cathedral and find an automap station, then head straight forward to a green-lit door that will open as you approach. Use your new weapon to destroy the zombies inside the remnants of the bell tower then turn right to reach the exterior of the "Scott/ShuZ" building where imps and blaster soldiers are fighting each other. Head around the outside of the building until you encounter an arachnotron and some other demons, kill them all then enter the destroyed parking garage to find a wall with a green crack. Punch through this wall to enter an open area with some zombies then look left to see an imp on a ledge throwing fireballs at you; go to that ledge and jump towards the pitted wall in front of you, grab onto it and climb up to find a yellow keycard.

With the yellow keycard, kill the blaster soldier that smashes through the wall in front of you then drop down to find a door requiring yellow access; approach the door to open it then go down the escalator to a shopping area. Push past the zombies and blaster soldiers in this area while watching out for the fireball launchers ahead, then go round two corners to confront an arachnotron and some more fireball launchers. Time your run through the fireballs and go down the right-hand staircase to reach a subway station with a third modbot, which you can use to get a modification for the heavy cannon, then enter the train carriage next to it to find the frag grenade and its launcher. Walk through the train until you get to a monkey bar then swing across it and make a double-jump to reach the Orion skyscraper ahead. Inside the skyscraper is an arena where you will encounter your first cacodemon along with other opponents - you are advised to fire sticky bombs or frag grenades into the cacodemon's mouth to stagger it and allow for easy glory kills. After clearing the opposition an arachnotron will burst through a sealed door - kill it then go through the door it just opened and turn left to enter another part of the skyscraper.

Head through the empty area and go up the steps, ready to kill a cacodemon that emerges from a pit then turn left and head forward to a destroyed section of subway tunnel. Jump over the pit to attach to a metal wall, look right to make another jump to a pitted wall, then look behind you and time a third jump past some flame jets to a ledge with a ruined train carriage. Go through the carriage to enter a tunnel and head past some zombies and imps until you reach a Codex page, then go through the small doorway on your right to find a maintenance passage with a tentacle hole - approach the hole to make the tentacle emerge then quickly shoot it before it hits you. Continue following the passage past a blaster soldier and another tentacle, then go up two sets of stairs to a parking lot with a cacodemon. Ahead of you is an open elevator shaft with a pitted wall inside it, which you can climb up to a mall area - the opposition here is more intense than before and space is limited, so stay on the move and use all your weapons to keep the demons at bay. Once the area is clear, a magic barrier across a window on the second floor will disappear - approach the window and kill the blaster soldiers that jetpack through it, then run through the window to land in an open area with more imps and blaster soldiers. Head towards a tunnel on your right with some fireball launchers inside it, and once you get through the tunnel kill all the enemies waiting on the other side, including an arachnotron firing plasma rounds from a raised platform. Once all the enemies are dead, a red slipgate leading to the demonic citadel will open; go up the steps to reach it.

After passing through the slipgate, head forward to some large gates that will open as you approach. Go through the gates then climb either set of steps, turn right and follow the passage until you reach some stairs leading to the lift chamber (Fast Travel is unlocked at this point if you want to go back and collect missed items). Step on the pentagram lift in the middle of the chamber and use the red skull switch to finish the level.

There are no challenges for this level. 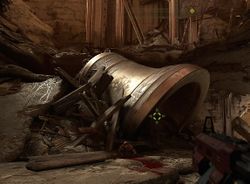 The large bell that the player can ring.
Retrieved from "https://doomwiki.org/w/index.php?title=Hell_on_Earth_(Doom_Eternal)&oldid=355351"
Category:
Hidden category:
DoomWiki.org