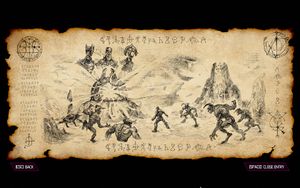 The Hell priests orchestrate the demise of one of Sentinels' elite warriors in a page from the Ligra Sultagenta.

The Hell priests are characters present in the backstory of Doom (2016) and appearing in person in Doom Eternal. They are three corrupted Night Sentinels of once-holy blood who can control and coordinate the actions of demons, and are used by the Khan Maykr as catspaws as she cannot directly control the forces of Hell. All three bear the title of "Deag", which presumably means "priest" in the Sentinel language. Their lifespan is extended indefinitely by placing their souls into special medallions; however, the Doom Slayer acquires these medallions, allowing him to kill them. They do not have any special abilities that would allow them to be a combat challenge for the Doom Slayer, and therefore are not considered to be boss monsters. They can, however, teleport - Deag Grav does so while saying, "Calommus V Turna," a phrase of unknown meaning.

In the far past, the Hell priests were members of a holy order of Argenta priests, known as the Order of the Deag, who first worshipped and studied the Elemental Wraiths, but later dedicated themselves to service of the Maykrs after contact between their species was made at the end of the Time of Grief. Once the Khan Maykr made her deal with Hell for the acquisition of Argent energy, many of the Order's members followed her and betrayed their own people. Despite this betrayal, described as a "violation of the Covenant" by King Novik, Sentinel law was never revised, and still protects them due to their former status. Images in the Codex and the Slayer's flashbacks depict them as essentially human in those days, but as of the events of Doom Eternal their skin has taken on an ashen-grey hue, their eyes have become blood red, and their voices have become distorted, most likely due to their prolonged demonic corruption.

When taking part in battle, the Hell priests ride in Hell barges, moveable temples which are carried by eponymous Titans. From these command posts, they broadcast powerful psionic waves which bolster the strength and coordination of Hell's armies. The Hell barges are invulnerable to all conventional weaponry, but their psychic link to the Hell priests means that if any of them die their corresponding Hell barge will be essentially lobotomized shortly afterwards.

In the past, the priests were responsible for the scattering and demise of the Sentinels' elite warriors after the latter planned an expedition into Hell to destroy the Nekravol. Afterward, they orchestrated the corruption of the Betrayer and destroyed their ancient gods, the Wraiths, allowing Argent D'Nur to be overrun by the demons and giving their Maykr masters, as well as themselves, total control over the world. They continued to work evil among their remaining people, debauching the public with blood sport and unrestrained cruelties.

The Hell priests were also responsible for the entrapment and binding of the Doom Slayer. It is said by the Nameless One that as the Slayer sought prey in the tombs of the Blood Keep, the priests laid a trap and brought the temple down upon him. While he was trapped, they cast spells to separate him from his Praetor suit and then bound him with Argent energy into a sarcophagus, where he would remain trapped for ages of Hell until he was later retrieved by Samuel Hayden in a UAC expedition into the Kadingir Sanctum, and then shortly freed after Olivia Pierce's Hell wave struck the UAC's Mars facility.

The Hell priest Deag Ranak was responsible for the corruption of the UAC which was evident in Doom (2016), acting in proxy via his connection to Olivia. The two are said to have worked together in secret on the UAC Mars Base prior to the events of that game.

At the beginning of the Doom Slayer's campaign in Doom Eternal, the three Hell priests are nearing the completion of a blood ritual to permanently consume the Earth and join it with Hell. All three must be eliminated in order to stop what has been set in motion.

The Hell priests are:

Deag Nilox
The first Hell priest, encountered on Earth. Wears a crown. He panics when the Doom Slayer invokes a medallion that nullifies the protection of his soul and is quickly executed afterward, by being choked to the point where his head is ripped off his shoulders. The Doom Slayer carries his severed head to the Deagic Council (now reduced to Deag Ranak and Deag Grav), prompting the other two Hell priests first to protest and then to leave in panic, teleporting away after being threatened by the Doom Slayer with his shotgun. The Khan Maykr arrives shortly thereafter and chides the Slayer, telling him that he has gone too far, and that he cannot oppose her will because he was "made to enforce it."
Deag Ranak
The second Hell priest, encountered in the Doom Hunter Base. Wears a face-concealing headpiece. The most inventive of the Hell priests, he seeks to defend himself from the Slayer by creating the Doom hunters who serve as his "guardians". He is also responsible for contacting Olivia Pierce as well as corrupting the UAC at large, and took over its cultist divisions after her death. He tries to buy his survival from the Slayer by promising him "gifts to aid [him]", but is decapitated by the Slayer's Doom blade despite his attempts to bargain.
Deag Grav
The last Hell priest, responsible for resurrecting the Betrayer’s son in the form of the Icon of Sin and the fall of Argent D'Nur. Wears a small headpiece resembling a diadem. After the Slayer executed the first two priests, the Khan Maykr evacuated him from Earth and hid him on Sentinel Prime. He is apparently able to direct demon activity on Earth from this remote planet. It is said he organized civilian-versus-demon bloodsport in Sentinel Prime's gladiatorial arena after the fall of Argent D'Nur, where it previously served as a proving ground for Night Sentinel recruits including the Slayer himself. He left his soul medallion in the guard of the Gladiator, allowing the Slayer to recover it after defeating the demon. While the priest is ranting and raving about the inevitability of Earth's consumption by the demons, Deag Grav's head is blown away with a super shotgun blast. As a result, the Slayer is declared a criminal by the corrupt Argenta and must flee Sentinel Prime precipitously.