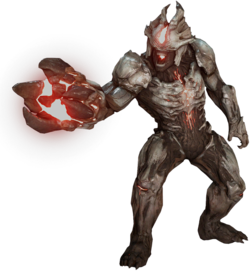 The Hell razer is a new form of demon which appears in the 2016 Doom. It could first be spotted from afar, without any explanation offered, in screenshots released shortly after E3 2015 by Bethesda. According to in-game codex information, the creature is presumably the end result of a demonic parasite infesting a possessed soldier.

The Hell razer's main weapon is a precise red laser that seems to have unlimited range. This can be a nuisance in certain large arenas, e.g. Reactor room in VEGA Central Processing. Fortunately, the lasers do not track well; they can be easily dodged with minimal movement. At close range, however, it exhibits a melee attack similar to that of the possessed soldier.

UAC data classifies the Hell razer as an astute, tactical foe that prefers long-range combat using its arm cannon laser beam, which consists of unrefined but highly focused Hell energy. Lazarus Project research examined how a parasitic hell razer embryo alters a host creature, producing the arm cannon and altering the host body so that it can survive the heat produced by use of the weapon.