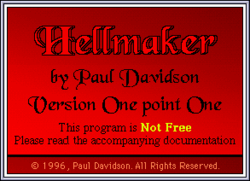 Hellmaker is a level editor for the Apple Macintosh. It was created by Paul Davidson. Maps created by Hellmaker have an additional "PWADINFO" lump, which contains some metadata for Hellmaker. 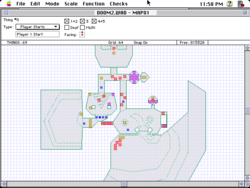 The current stable version is 1.1. Version 1.2b2 features a 3D preview and supports Hexen WADs, but it is unstable. WADs can still be built exclusively with that version, however.

An unofficial update, "Hellmaker Enhanced", was created in 2004 using ResEdit and adds support for Boom, Legacy, EDGE, and other special linedef, sector, and thing types. Without the source code to work with, Hellmaker Enhanced does not fix any bugs or update Hellmaker to work natively with MacOS X.

The homepage for Hellmaker is no longer available.