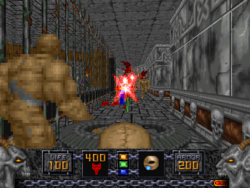 A player using the Hellstaff 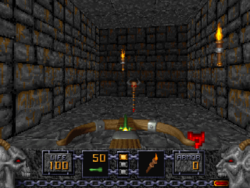 Hellstaff in a hidden chamber in E2M2: The Lava Pits.

The Hellstaff is a weapon in Heretic. It appears to be made out of a demon's skull and spinal column. It is powered by runes, which it consumes at a rate of one rune per projectile in regular mode, or five per shot when the Tome of Power is being used. Maximum capacity is 200 runes, or 400 with the Bag of Holding. This weapon is always effective on ghosts.

In its regular mode, the hellstaff rapidly fires red energy projectiles, performing two shots in succession with every firing cycle, barring ammo depletion. These energy bolts are one of the few projectiles in the game subject to the effects of wind.

When a Tome of Power is active, the hellstaff's firing rate slows down, and it launches powerful projectiles which deal 10-80 damage and summon "clouds" of rain above the area of impact, at the cost of five runes per shot. In single player, this rain is always red, but in deathmatch the four players each create rain of their corresponding cloak color. Every tick, the summoned cloud of rain has a ~90.2% chance to spawn a raindrop within a 64-unit radius, and each raindrop does 5-40 damage. Only 2 clouds can be active at once; summoning a third destroys the oldest one. Larger foes, such as an iron lich, are likely to get hit by more droplets than smaller foes, hence causing more damage. However, boss foes (the maulotaur and D'Sparil) have a partial immunity to this attack, reducing the damage each drop does to them by 80%. The powered-up shots will also home in on enemies provided they are centred in the player's aim when the weapon is fired.

This weapon makes its first appearance in a secret room in E2M1: The Crater. It can be discovered again in a hidden chamber on the next map. In E2M3: The River of Fire, the hellstaff finally sits in a non-secret area.

In its normal mode of operation, the hellstaff is generally effective for hosing high-HP monsters such as ophidians and boss creatures, as well as suppressing large groups, fighting enemies lined up in long, narrow corridors, and destroying ghosts, against which it is fully effective. The necessity of firing runes in multiples of two make this weapon less desirable against lone low-HP enemies such as chickens or monsters that have already been injured by other sources of damage. The effect of wind can, in the rare situations where it is a factor, also make this a less desirable weapon to use.

The powered up mode is especially effective in situations where large numbers of monsters can be funneled through a narrow chokepoint within a short amount of time. By firing two powered bolts such that they create an acid storm in the chokepoint, any non-boss monster trying to pursue the player through the storm will be rapidly annihilated. For maximum damage output this is best done by hitting a leading monster just as it passes through the narrow area, although it is also possible to lay a trap by hitting the walls. In wide open areas it is much easier for the paths of enemies to avoid the storms, potentially leaving the unpowered mode or a different weapon as the preferable choice.

The hellstaff is a recurring weapon in Heretic II. There, its normal firing mode is similar to the original, though the powered up mode was changed to an alternative form of rapid fire while the acid rain effect was given to a different weapon, the storm bow.

In the IWADs the Hellstaff is first encountered on these maps per skill level:

The IWADs contain the following numbers of Hellstaffs per skill level: