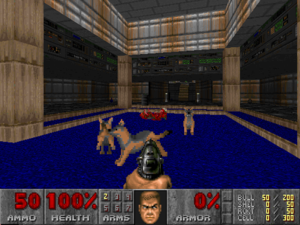 The helper dog is a feature that originated in the MBF source port, created by Lee Killough to demonstrate friendly monster AI. The helper dogs use retouched sprites from Wolfenstein 3D, as well as some of the Wolfenstein dog's original sounds.

Lee went to some lengths to ensure that the dogs behaved realistically by enhancing friendly AI with various features. After consulting Longplain Kennels on canine behavior, he learned that a shot dog would probably not attack a person who shot it. Because of this, friendly monsters who only have melee attacks never retaliate against the player when shot. Dogs are often protective of their masters, so if the player is in poor health, the dogs will abandon their current battles and fight whatever hurts the player. Dogs try to stay with their owners, so friendly monsters have an average distance they remain from the player, dogs are allowed to jump off tall ledges when the player is standing on the other side, and in addition, they will tend more often to stay on lifts that are about to move up or down with the player on them.

The dogs are enabled in the MBF port only by use of the -dogs parameter, and they are only available in single player games (they spawn at the player 2–4 starts).

Other ports to feature the MBF helper dog include MBF's descendents, and ports which added support for them for cross-port compatibility purposes.

The helper dog only has a melee attack which is exactly equivalent to the demon's bite.

Helper dogs are incredibly resistant and cannot easily be killed by mistake. Also, because they are very short, most fireball-throwing enemies will direct their attacks over the dogs' heads. This means that three dogs can quickly dispatch even a cyberdemon with impunity.

The dogs are not friendly by default and may also appear as enemies if placed in maps without the appropriate flag, or if resurrected by arch-viles. They can be treated more or less like demons in this case, though their small size, fast movement, and high hit points make them a considerably greater threat. They can help distract monsters in monster infighting scenarios. 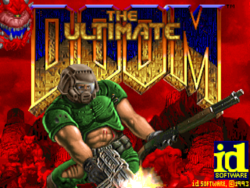